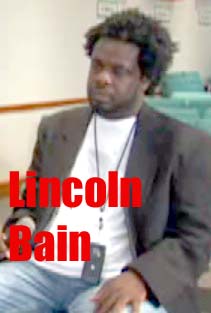 Bahamas Press contends the Gestapo Royal Bahamas Police is now in full effect. Last week they picked up and questioned C. Allen Johnson in connection with the takeover of the Ministry of Foreign Affairs website.

Sources with knowledge of the situation with Bain said, “Bain was asked to turn over all recordings involving the corrupt worker of the Passport Office who is alleged to have been bribed by a woman seeking to fast track passports for her two daughters.

“They thanked me for my work in both cases and let me go.”

Bain, who is known for his public defender role particularly when he agitated compensation for the victims of the Sea Hauler, was not shaken by the incident. This is the second radio talk show host to be questioned by police recently.

Orthland Bodie was recently detained by police for comments made on his talk show. He also was released.

Tommy Turnquest should hang his head down in shame. They are all over the place attempting to intimidate ‘FREE SPEECH’, while the real criminals walk around the street free on bail. Boy Mugabe ain’t playing.