FirstCaribbean still struggling to hold its own in banking arena

By The Jamaican Observer and Grant Robertson

Canadian Imperial Bank of Commerce (CM-T73.05-0.47-0.64%) is being sued for $1.3-billion (U.S.) by the estate of Lehman Brothers, the investment bank whose stunning collapse touched off the most serious phase of the global financial crisis.

The lawsuit stems from a credit default swap CIBC made in 2008 with the New York financial institution prior to Lehman filing for bankruptcy on Sept. 15 of that year.

The estate that is now sorting through Lehman’s ruins on behalf of creditors claims it is entitled to $1.3-billion from a collateralized debt obligation (CDO) called the Pyrix Transaction. CIBC’s unfunded obligations were written down to zero when Lehman filed for bankruptcy. However, the Lehman estate argues in court documents that Lehman was “massively in the money” and deserved to be compensated.

FirstCaribbean International Bank, the largest indigenous banking entity in the region, continues to struggle to make its presence felt and to pose a real threat to its competitors. Its results over successive quarters continue to be lacklustre and its products have fared little better, failing to strike a chord in the marketplace. A common complaint is that loan applications made in one jurisdiction have to be approved by head office in Barbados, with head office unacquainted with business personages or for that matter the operating environment. Put quite simply, the refrain is that First Caribbean remains detached. In Jamaica alone it has had four managing directors in ten years (Anne Shirley, Raymond Campbell, Milton Brady and Clovis Metcalfe).

First Caribbean International Bank Limited (FCIB) reported an EPS of US$0.08 for the nine months ended July 31, 2010. This represents an unchanged EPS from the corresponding period in 2009.

Operating income grew 32.7 per cent to US$136.1 million, thereby offsetting the decline in its Net interest income. Operating income was up “due to non-recurring higher gains on the sale/repurchase of investment securities /debt mark to market losses and higher fee income”.

Income before tax for FCIB was down 9.7 per cent, moving to US$134.1 million for the year. The Group benefited from lower income tax expenses which fell to US$9.5 million, because of the lower income earned in the higher tax jurisdiction. This resulted in a relatively flat net income of US$124.5 million when compared to the same period in 2009.

A fall in customer deposits 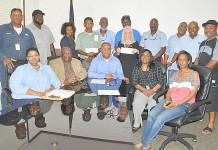