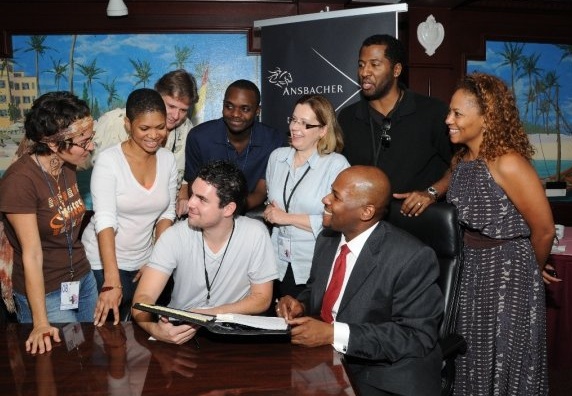 Nassau, Bahamas – November 2, 2010 – In preparation for the Seventh annual Bahamas International Film Festival (BIFF), the organizers are proud to announce the return of the Filmmaker’s Residency Program.

In years past BIFF has exclusively provided the Bahamian and Caribbean community with the opportunity to receive invaluable mentoring from industry professionals. This year BIFF has expanded to include filmmakers from around the world to submit screenplays that are based in The Bahamas or Caribbean region.

Filmmakers’ Residency Program seeks to nurture new filmmakers and screenwriters by providing them with an unrivaled opportunity to spend a full day with accomplished professionals who make a living working in the industry from Los Angeles and New York.

“It is our intention that the contacts made will last beyond the time spent at the program, and that all who take part in the program will benefit from attending,” said BIFF Founder and Executive Director Leslie Vanderpool.

The esteemed group of Filmmaker Residency Advisors presiding over this year’s program and evaluating candidates include Tom Heller (producer of “Precious” and “127 Hours”), Andrew Tapani (producer of “The Haunting in Connecticut”), independent producer Kelly Amber Moore (formely of Saturn Films), and actor/writer/producer Ray Forchion (“Confessions of a Thug”).

Amateur filmmakers participating in the program include Karen Webb with her film project “Arthur’s Salvation” (US), Sara Van Acker with “Bloodlust” (US), Sonia Castang with “Winward” (UK), Mark Cerulli with “Sunburn” (US), Andrew Beckford with “Slavery in the Bahamas” (Bahamas), and Christina Smith with “Fearless Summer” (US).

Maria Govan, director of the highly acclaimed Bahamian film RAIN met her producer through the Program and went on to raise $1 million to make her film within the Bahamas. Maria says, “BIFF offers Bahamians two very important things through the residency program — the opportunity to get feedback on one’s work so that Bahamians may become better screen writers and also the opportunity to connect with industry people who have the capacity to help realize that which is given to them on the page.”

The program will take place during the BIFF, from December 2 – December 5th, when filmmakers and advisors will be introduced, followed by one-on-one meetings. Towards the end of the week participants will come together so that each person can ask questions in a group dynamic. Finally, the advisors will meet with each other and give feedback on each project, which will provide the filmmaker with comments from an impressive cross-section of expertise.

Vanderpool added, “As the festival grows with each passing year, the Residency Program continues to provide us with outstanding artistic work from both the Bahamian and international communities. We are confident that this year will be no different.”

It was previously announced that Sony Pictures Classics’ acclaimed comedy “Tamara Drewe” will be the opening film at this year’s festival. The special event screening will take place on Thursday, December 2nd at the Atlantis Theatre on Paradise Island. Directed by two time Academy Award® nominee Stephen Frears (“High Fidelity,” “The Queen,” “Dangerous Liasons”), the film stars Gemma Arterton (“Prince of Persia,” “Clash of the Titans,” “Quantum of Solace”) in the title role, along with Roger Allam (“V for Vendetta,” “The Queen”), Bill Camp (“Public Enemies,” “Deception”), Dominic Cooper (“Mama Mia!” “An Education”), Luke Evens (“Robin Hood,” “Clash of the Titans”) and Tamisn Greig (“Shaun of the Dead,” “Falling Apart”).

The Bahamas International Film Festival is also continuing its efforts to educate and inspire a new generation of filmmakers. The Festival announced today that it will be expanding its popular Youth Film Workshop during the seventh annual BIFF by partnering with schools throughout Nassau and integrating the workshops directly into classrooms.