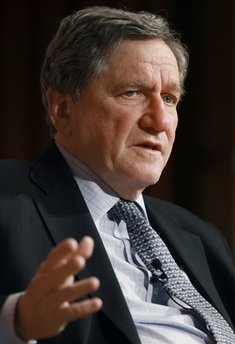 FILE – In this March 4, 2010, file photo Richard Holbrooke, the U.S. special envoy for Afghanistan and Pakistan, addresses an audience at the John F. Kennedy School of Government on the campus of Harvard University in Cambridge, Mass. Holbrooke, a longtime U.S. diplomat who wrote part of the Pentagon Papers, was the architect of the 1995 Bosnia peace plan and served as President Barack Obama’s special envoy to Pakistan and Afghanistan, has died. He was 69. (AP Photo/Steven Senne, File)