ON THE FINAL DAY of the Sr. Central American Track and Field Championships in Mayaguez, Puerto Bianca Stuart leapt into the history books by matching the Championships record as well as setting a new Bahamian National Record in the Long Jump.

This surpasses the IAAF A-standard qualifying mark for the Daegu World Championships as well as the London Olympic Games.

The old Bahamian record of 6.80m was set by Shonel Ferguson in Taichung, Taiwan in 1982 on the way to the Commonwealth Games in Brisbane, Australia. It was tied by Jackie Edwards in San Jose, California in 1996.

After Stuart did her feats, The Bahamas ruled supreme in the 200m.

Nivea Smith tied her personal best of 22.80sec in winning the CAC crown and Anthonique Strachan won the Silver medal in 22.90sec, and new personal best. Strachan ran 22.93sec in the semi-final of the Carifta Games in April for a personal best.

Right afterward Michael Mathieu won the Men’s 200m in 20.60sec. Demetrius Pinder had made the final but decided not to run.

In the final event of the evening, The Bahamas won the 4x400m relay in 3:01.33. The team was made up of LaToy Williams Avard Williams, Michael Mathieu, and Ramon Miller.

This gives the Bahamas a total of five Gold medals, two Silver medals, and three Bronze medals, for a total ten medals, placing them fourth in the competition.

The BAAA wishes to thank the athletes, officials, parents, fans, the media, The Ministry of Youth, Sports and Culture and most of all those corporate and individual financial supports, without whom success would have not been possible. 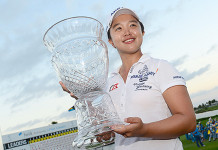