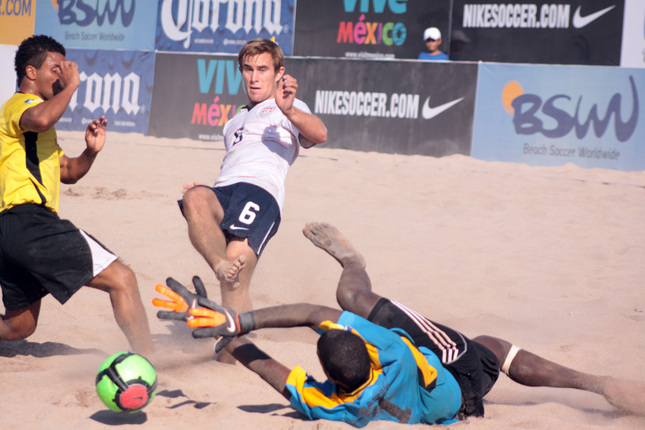 The officials are suspected of being offered or taking $40,000 in cash to back Bin Hammam against FIFA President Sepp Blatter, then denying their actions to investigators led by former FBI director Louis Freeh.

The governing body added that the 16 will be invited for new interviews by Freeh’s team as part of an investigation led by Robert Torres, a judge from Guam.

“It is important to note that the investigations are still ongoing, and that it is therefore possible that further proceedings could be opened in the future,” FIFA said in a statement.

The list also includes Mark Bob Forde from Barbados, who was a FIFA-approved international referee for almost 20 years.

Haiti federation president Yves Jean-Bart is also under investigation. He made a speech at the FIFA Congress on June 1 criticizing English officials who wanted Blatter’s election delayed while corruption allegations were fully investigated.

“Whatever is necessary,” Guzman told The Associated Press by phone in Santo Domingo. “They have not contacted me yet.”

Ledesema denied being offered bribes to vote for bin Hammam.

“I never received any offers. I think this is all a political case,” he told the AP.

FIFA’s ethics panel also suspended two Caribbean Football Union staffers for one year for their part in distributing the cash-stuffed brown envelopes in a Trinidad hotel.

FIFA invited officials from CFU member countries for “truthful and complete reporting” of what happened during the Qatari candidate’s May 10 campaign visit to Trinidad.

FIFA’s legal process typically means accused officials are called before the ethics panel, which decides if the evidence demands more investigation and a full hearing weeks later. Those under suspicion face being provisionally suspended from any soccer duty, including contacting other officials and attending national team games.

The scandal threatens to remove some of the Caribbean’s most influential soccer leaders during a busy period of 2014 World Cup qualification matches.

Trinidad and Tobago, Barbados and Guyana — who each have officials on the FIFA list — have been drawn in a four-team, second-round group that is played from September to November. Their group is completed by Bermuda, whose officials were among the original whistle-blowers exposing the scandal.

On Wednesday, FIFA suspended its most senior official from Barbados, Lisle Austin, for one year.

Austin, a member of FIFA’s referees committee, broke soccer rules by going to a civil court with a legal grievance against the CONCACAF continental body in the aftermath of the bribery scandal.

Austin said Thursday he plans to continue his action in the Bahamian court regardless of his suspension, and believes that “ultimately fairness and truth will prevail.”

“FIFA’s desperate attempt to suspend me through its kangaroo court affirms that it believes my rights to judicial due process are inferior to its interests of sweeping under the rug any attempt to bring transparency to the football world,” Austin said.

“FIFA’s present leadership has once again shown that it is a corrupt cabal of arrogance and cronyism, administered by individuals who continue to act outside the rule of law, seeking to destroy anyone who dares to question the existing regime. The hearing was yet another attempt to marginalize and silence calls for reform and transparency in FIFA’s lucrative dominance over the game of football.”

Warner resigned all his soccer duties and privileges in June rather than face FIFA justice. A leaked report revealed that the five-man ethics panel believed it had “compelling” evidence of a bribery conspiracy between Warner and his longtime FIFA colleague bin Hammam.

Warner had been an executive committee member for 28 years and was president of CONCACAF and the CFU, representing 25 of the 208 FIFA members.

The Trinidad and Tobago government minister returned to his home island with what FIFA called a “presumption of innocence.”

FIFA’s case was built on whistleblowers’ evidence from the Bahamas, Bermuda, Cayman Islands and Turks and Caicos Islands who said they were offered brown envelopes stuffed with four piles of $100 bills.

Officials from Puerto Rico, Surinam, Aruba, Curacao and Grenada then cooperated with the FIFA investigation by confirming they were offered $40,000 payments. A 10th CFU member, Cuba, did not attend the conference in Port of Spain. FIFA is investigating one Cayman Islands official, federation vice president David Frederick.

The 15 remaining Caribbean soccer federations were invited to meet Freeh’s investigators for questioning in Miami or the Bahamas. Some did not attend either session, and others accepted FIFA’s expenses-paid invitation, though stood by earlier denials that any corruption took place in Trinidad.

FIFA issued a warning after bin Hammam was banned July 23 that officials had another 48 hours to give explanations and confessions or “be subject to the full range of sanctions.”

Included among the 16 are federation presidents Franka Pickering of the British Virgin Islands, Osiris Guzman of the Dominican Republic and Anthony Johnson from St. Kitts and Nevis. General secretaries Noel Adonis of Guyana, Trinidad and Tobago’s Richard Groden, and David Hinds from Barbados are also on FIFA’s target list.

Tarnished by the scandal, bin Hammam withdrew his candidacy three days before the FIFA election, though he denies the allegations.

The 75-year-old Blatter was left unopposed to receive a fourth four-year term. He was endorsed by 186 of FIFA’s 208 national members, including most Caribbean islands. Blatter then pledged to reform FIFA in his final term.

Bin Hammam, the Asian Football Confederation president, has promised to appeal his ban at FIFA, the Court of Arbitration for Sport and Switzerland’s highest civil court.