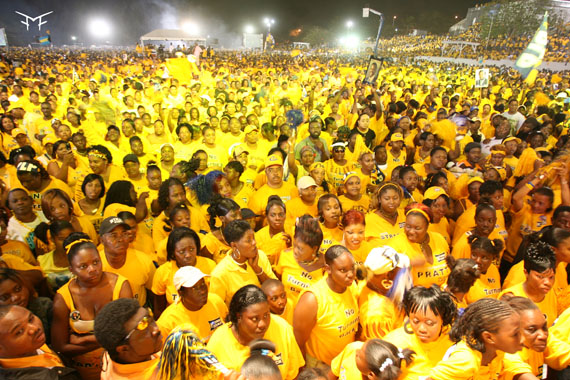 Minister of Public Works and Transport Neko Grant assured the motoring public that his Ministry “will monitor the project to ensure that it is completed on time so that there would be minimal discomfort and inconvenience to the public”.

The PLP is shocked that there are apologists in our Community who continue to promote the FNM’s propaganda when they know fully well that the FNM have terribly failed the Bahamian People with the New Providence Road Works fiasco. The facts are known to them but they fail to hold the Government’s feet to the fire and make them accountable.  One such apologist had the temerity to suggest: “The dislocation to lives and businesses of many persons has resulted in constant angry complaints, but when it is completed, Hubert Ingraham will always be remembered as the prime minister who had the courage to undertake the transformation and modernization of New Providence.  When that day comes, the complainers will fade into the background. Until then – have patience”.

In response to this thoughtless, condescending and reckless statement, the PLP is obliged to remind the apologist and the public that at the signing of the Contract on Dec 15th 2008 with Jose Cartellone, the Minister of Public Works and Transport Neko Grant assured the motoring public that his Ministry “will monitor the project to ensure that it is completed on time so that there would be minimal discomfort and inconvenience to the public”.

The PLP strongly asserts that the constant angry complaints should have never arose had the FNM Government safeguarded adherence of its Contract with the Argentinian Road Contractor Jose Cartellone, which was a condition of the IDB’s loan agreement and mandated : that “The Contractor shall so conduct his operations as to offer the least possible obstruction and inconvenience to the public and he shall have under construction no greater length or amount of work than he can properly manage at a time with due regard to the rights of the public in maintaining a free flow of traffic”.

It is also telling that the commitment to Road works at night was also not enforced.

As a result of this blatant lack of enforcement by the FNM Government, there has been constant massive obstructions and inconvenience to the motoring and business Public throughout New Providence.  The Contractor has no regard for the length and amount of work he can properly manage at any given time and was allowed without logic and justification to carry out works on multiple corridors simultaneously.

It is abundantly clear to all right thinking Bahamians that Minister of Works Neko Grant, with the support of Prime Minister Hubert Ingraham, failed the Bahamian People miserably in allowing Jose Cartellone to execute the road works in a nightmarish manner.  Because of the prolonged road works, Bahamians are increasingly depressed, frustrated and angry over what seems to be a never ending situation. Vehicular damages, excessive fuel consumption, loss of productivity, and a destruction of many businesses have taken place since these road works began.

The FNM government has also badly failed the Bahamian People in the coordinated planning and implementation of these road works, as we have now discovered, with the announcement by the Bahamas Electricity Corporation that the Corporation will now have to dig up completed newly constructed roads; as no provisions were put in place to be able to maintain or expand its network. This is very severe indictment of the government inflicting additional and unnecessary financial burden on the backs of struggling Bahamians.   Why was the contractor allowed to get away with this?

Throughout all of this Bahamian workers are still being paid minimal wages by Cartellone.  The Progressive Liberal Party is on record warning the government about this from the very early stages of this project but nothing has been done.

Word has also come that the Water and Sewerage Corporation has told the government that the newly constructed roads, including the new airport gateway project, may have to be dug up, as work will have to be done on the pipes and laterals for their newly announced NRW program. It is understand that WSC has been very critical of the contractor employed on the current road works, as the work done was not up to WSC required standards.

The original Contract with Jose Cartellone was for approx. $120 million and we are informed that the projected cost overruns are to exceed $40 million.  This is a whopping 33% increase and the roads will still be dug-up!   This a clear affirmation of gross incompetence and mismanagement of the road works by Hubert Ingraham and the FNM Government. Minister Neko promised that his Ministry “will monitor the project to ensure that it is completed on time so that there would be minimal discomfort and inconvenience to the public. This will forever be an albatross around the necks of Bahamians and an example of utter uselessness.

The Bahamian people will certainly remember Hubert Ingraham and his gang at the polls in the 2012 elections. The next PLP Government stands ready to clean up the mess the FNM have willfully and shamelessly perpetrated on Bahamians under the road program, which should have been built by tried and proven Bahamian Road Builders.