Why would the people who say they BELIEVE IN BAHAMIANS delay opportunity for a Bahamian Mobile Company? 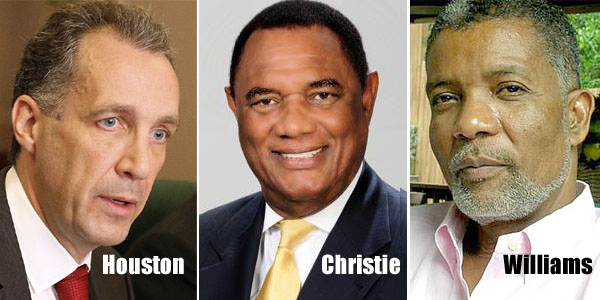 A BP Breaking Report puts question on how Haitian Nationals in Miami were selling BTC’s supplies! WHAT IN DA HELL IS DIS?

BP can also confirm that this was a part of the “unspoken” agreement for the 2 percent deal, along with an agreement to DELAY mobile competition until late 2015!

What is this that Christie managed to hatch up? To bring old tired Leon Williams who was already fired from the company back to BTC?

But we at BP have some serious questions for Cable and Wireless and Christie that we want them to confirm or deny:

Is this the same person who was already the subject of MULTIPLE internal audit reports?

Is this the same man, who, as CEO, caused the Board to have a more junior executive sign off on his expenses because he was so out of control?

Is this the same man who had BOTH Nassau and Freeport offices paying his one set of living expenses for over one year and who was pocketing the difference?

Inquiring Bahamians and Bahamas Press want to know! Could this investigation now underway at BP become another debacle for those in the Christie Regime?

Could this be the same man who ordered the shutdown of an Audit into a fictitious shell company ran by Haitian Nationals in Miami that was selling BTC its marketing supplies?  Why did he shut that Audit down? What was there to hide? And why would anyone even consider bringing such an individual back into the Corporation?

Boy, when the papers now shown to Bahamas Press are revealed – the [yinner know what we want say] ga hit the fan!

Could this be the same man who was SUSPENDED by BTC for an unauthorized trip on Bahamian taxpayer money where he took his peeps in the company down to Bimini for fun and frolic, wining and dining? Yinner should see who was on the list! Well, blow me down!

Could this be the same man that allowed a trailer load of goods to go missing from BTC stores? Vanished in thin air – without any accountability?

Could this be the same man who presided over the HIGHEST number of faults and service orders in the history of BTC?!

The same man who used to fly his protocol officers and personal attendees to international conferences to wait on him hand and foot at the expense of Bahamian taxpayers?

The same man who DENIED some 20 persons a job in the company who were interviewed and qualified –  but instead brought in 20 persons handed to him on a list by a “politician”, 20 persons who didn’t interview and were not qualified?

The same man who never worked in a competitive environment?

BP gatta ask, “What darkness is this?  We going back to the Day of the Dinosaurs?”

Say it ain’t so Christie?  Say it ain’t so Cable & Wireless!  Deny the above and we will take back everything we just said. But you know BP has already done an intensive detailed investigation and everyone knows – it ain’t far from the truth!

And we ga watch this one closely – Very closely because this is just the tip of the iceberg!

BP understands that staff members are trembling in their boots as grand windbag and empty suit Leon Williams has already put togeher and sent in an organizational chart with the names of his lackeys that he wants to promote.  And the names of those persons he wants to victimize.  The staff remembers those days of endless internal audits and questionable contracts and kisses by favors.

BTC about to head back to a dark past headed by a pompous empty suit with a wicked agenda and the WUTLESS MEDIA still can’t do their job and find out what is going on.  But Thank God the Bahamian public has Bahamas Press on their side, ready, willing and ABLE to expose what really is going on….

Frankly, BP don’t care if you get rid of Geoff Houston.  But if you gonna do that, then find someone who will take the company forward and not back to 1985.

And BP says NO to any deal that will delay competition! How could Christie dem say they BELIEVE in Bahamians and then at the same time ambush local investors ready to invest in telecommunications in their own country! WHAT IN THE HELL IS DIS?

Stay tuned.  More to come in this story….