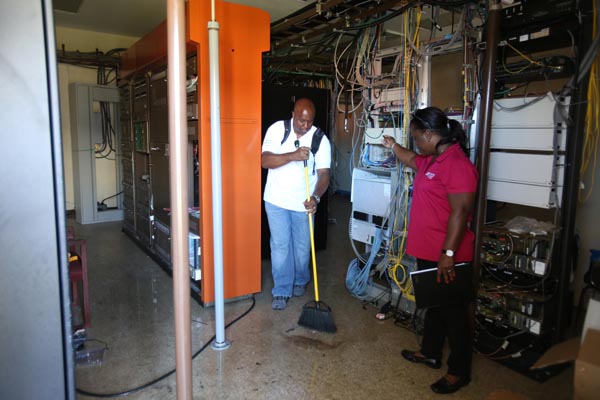 NASSAU, The Bahamas – The Bahamas Telecommunications Company’s Chief Executive Officer Leon Williams has affirmed that the company is working to restore communication services to all areas affected by the passage of Hurricane Joaquin and restoration to the “main” islands should be completed by the end of this week depending on the location of the island.

BTC, today October 7, announced that the company is conducting assessments and restoration efforts for the southeastern Family Islands devastated by the Hurricane during a press conference at headquarters on JFK.

Mr. Williams said, “BTC is fully committed to rebuilding its network to help residents in the South-East Bahamas return to some semblance of normalcy.

“We’re doing a magnificent job. We’re doing the best we can do,” stated Mr. Williams. He said the organization is sending generators to the islands, technicians are on the ground, and teams of engineers and human resources are visiting the islands.

To date, services have been restored to Cat Island and Exuma; mobile cellular services to Cockburn Town, San Salvador. Call Centers have been established in Ragged Island; Clarence Town, Long Island; and Inagua for residents without phone services.

“Our challenge is getting Long Island, San Salvador and Rum Cay up and running so that we can bring the other islands in. The way the network is configured I don’t see a major challenge there to do some temporary services. Rebuilding infrastructure will take some time but again it depends on the location,” Mr. Williams said.

He explained that there is not a major need to request the assistance of the Caribbean Association of National Telecommunications Organizations because resources are available within the family of Cable and Wireless. “Once we’ve done all the assessments and we’ve got the procurement for the equipment that we need to put in place then we will have the resources in.”

BTC has formed partnerships with several stakeholders to assist communities that have been affected by the Hurricane. Mr. Williams announced that BTC and the Utilities Regulation and Competition Authority of The Bahamas (URCA) have joined forces and will make a $1 million contribution to relief efforts. In 2014 URCA issued an adjudication and order to BTC for engaging in business practices, which contravened the Communications Act.

“Through collaboration URCA has directed the $1million fine into the relief fund for the Government of The Bahamas,” said Mr. Williams.

Additionally, BTC has teamed up with Sebastian Bastian of Brickell Management Group and the Bahamas Red Cross for the “Each One Reach One” Text initiative.

By texting the word HELP to 5200, each mobile user can donate $1 to assist with relief efforts. Funds will be donated to Bahamas Red Cross to assist with rebuilding efforts. BTC and the Brickell Management Group will match up to 50% of the donations.

Moreover, BTC has launched an in-house clothing and supplies drive and is organizing a clean-up campaign in the Southeast Bahamas. Beginning next week, two teams of volunteers from BTC will assist with clean-up efforts in Crooked Island, Acklins and San Salvador.