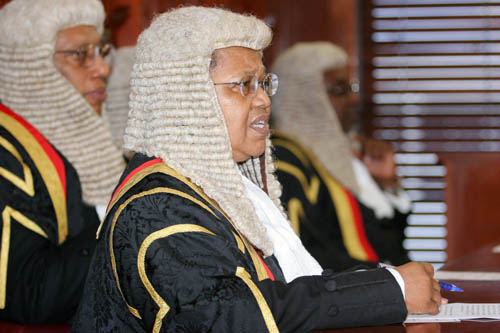 Justices once again sit in the hot seat, as cases pile-up before the courts of The Bahamas. (file photo)

NASSAU, Bahamas – Matters before the Coroner’s Court, which was abolished under the former administration, are mounting with no movement on these matters, Prime Minister Hubert Ingraham said this week.

There are currently 157 matters before the Coroner’s Court.

Mr. Ingraham commented on the backlog during his Meet the Press conference event in the nation’s capital.

“We [the FNM administration] had a Coroner’s Court. We had appointed Mr. Winston Saunders to be the Coroner (now deceased). He did quite an effective job in disposing of matters that go before the Coroner’s Court. This would be persons who die in police custody, or who die under suspicious circumstances, or who go missing, etcetera.

“That Court was abolished while we were in Opposition and the numbers have piled up.”

The matters before the Court include 21 suspicious deaths, 6 police shootings, 59 traffic fatalities, 21 drownings, 10 classified as missing at sea and 2 missing person matters in Kemps Bay, Andros and in South Andros.

Other matters before the Court are cases of murder, suicide and suspected suicide, accidental death, shooting and stabbing, boating and Jet Ski accidents, electrocution, house fire, and one case classified as “missing on plane.”