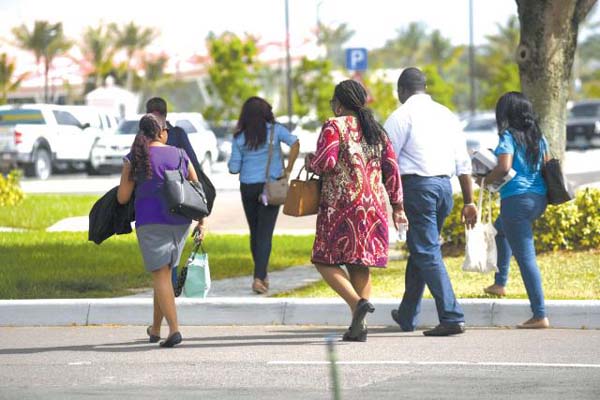 The Department of Statistics releases the results of its Labour Force and Household Income Survey which was conducted in May of this year. The survey provides information on the labour force as it existed during the reference period of April 25 – May 1, 2016.

Since November 2015, there was an increase (7,540) in the number of employed persons and a decrease (3,855) in the number of unemployed persons resulting in an improvement in the unemployment rate which declined from 14.8% to 12.7%. While New Providence’s unemployment rate decreased, the rates in Grand Bahama and Abaco edged up by 0.5 and 0.4 percentage points, respectively. At the time of the survey the rate in New Providence was 13.2%; in Grand Bahama, 14.7% and Abaco 10.1%.

Unemployment among youths (15-24 years) continued to be considerably higher than any other age group which is common to most countries. However, there was a noticeable decline in the rate from 30% recorded in November 2015 to 25.8%

Discouraged workers in the country declined by 10% over the six month period. New Providence, Grand Bahama and Abaco experienced declines in the number of discouraged workers – 14%, 16% and 7%, respectively. These persons, according to the standard definition of the International Labour Organization (ILO), adhered to by The Bahamas and most countries including those of theCaribbean, United States and Canada, did not look for work because they believed no jobs were available for them.

Additionally, the data show that:

Since November 2015, there was a 7% increase of own account workers (self-employed persons).

Twenty-one percent (21%) of unemployed persons were between the ages of 20-24.

Sixty-two percent (62%) of the Employed Labour Force was engaged by the private sector.

Approximately twelve percent (12%) of the Employed Labour Force was Non-Bahamian.

Influenced by Carnival related activities, since last November employment in the “Manufacturing” sector increased by 26%. This sector accounts for 4% of total employment.

The “Community, Social and Personal Service” industry, which includes the civil service, police service and domestic service continued to be the country’s largest employer in 2016 and accounted for 36% of the workforce.

This release, with accompanying tables, will be immediately available on the Department’s website, www.bahamas.gov.bs/statistics. Further details will be available by August 2016.