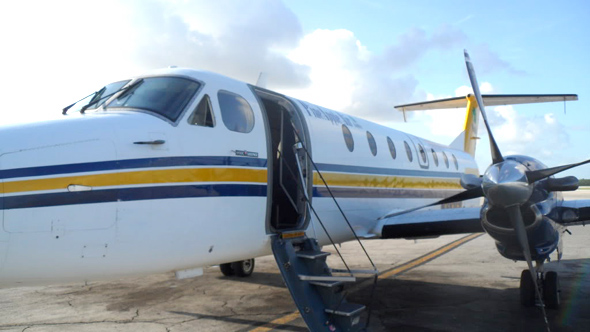 Breaking News coming into Bahamas Press confirms three Bahamians were arrested in Haiti this afternoon following their criminal decision to steal a plane out of LPIA.

Now get this, while the FNM mouthpiece all over the pages talking about cobra and “Da Cobra” we voted out of office on May 7th, ONLY BP has this breaking story.

We can report that around 5:45am yesterday a 1900 aircraft 19 seat plane was stolen from LPIA.

The aircraft, we are being told, is owned by Pineapple Air and was taken from the domestic section of the terminal.

Sources deep in the OPM tell us the incident initiated an international incident following the theft, involving agents from the Ministry of Foreign Affairs and National Security who immediately contacted the Haitian Government to get the plane back and arrest the occupants.

With its usual hard work and swift communication, Bahamas Press can confirm that the plane landed in Haiti yesterday afternoon.  BP has also learnt that Haitian officials arrested three Bahamians shortly after the aircraft landed there.

We can confirm the government of the Bahamas is now working on the details and paperwork to get the plane back.

We at BP believe the three Bahamians should face criminal charges in Haiti and spend the rest of their sentence in a Haitian prison in maximum security.