NASSAU, The Bahamas — Preliminary estimates indicate that more than 13,000 cubic yards of debris was removed from the Bain and Grants Town community during the first two days of the Over-the-Hill Clean-up and Bulk Waste Removal Campaign.

The campaign began on Friday and ramped up its operation on Saturday. Some of the work had to be completed on Sunday.

Officials from the Economic Development and Planning Unit of the Office of the Prime Minister, the Department of Environmental Health Services and The Bahamas Public Parks and Public Beaches Authority – who combined their resources and assets to make the campaign happen — say the figure equates to the size of six full-length football fields.

“So far everyone has done an excellent job in making Phase One of this initiative a success,” Dr. Nicola Virgill-Rolle, Director of the Economic Development and Planning Unit of the Office of the Prime Minister said.

“Want to thank everybody who have been out here working – DEHS, Beaches and Parks Authority, all of the workers from the Office of the Prime Minister (OPM) who have really been executing a tremendous work in executing the first phase of this cleanup.

“The cooperation from residents has been outstanding. Community cooperation/effort has been amazing. The residents got notification of this exercise well ahead of time, there was good communication around it, and so residents were well-prepared, they put their waste out as instructed and our facilitators were able to come by with the trucks and manual labour to take the debris out.”

Dr. Rolle praised the partnership between the three government agencies/departments. The bulk waste removal and management of the heavy equipment used was done through the Department of Environmental Health Services while employees of The Bahamas Public Beaches and Public Parks Authority took care of the manual work.

“The work over this first phase entailed cleaning down lots, bulk waste removal such as the removal of stoves, refrigerators, etcetera,” Dr. Virgill-Rolle said. “ We have also been removing derelict vehicles as well. Where persons have given permission to remove vehicles, they have been taken out of area as well.”

Mr. Kemi Jones, Project Manager for the Over-the-Hill Community Development Partnership Initiative of which the Clean-up and Bulk Waste Removal Campaign is but one pillar, said the focus of Phase One of the Clean-up focused on the areas north of Meadow Street, and north of Ross and Gibbs Corners. Officials will focus on the areas next weekend going back to areas south of Meadow Street and Ross and Gibbs Corners, as far south as Wulff Road and Poinciana Drive the weekend of January 26-28 during Phase Two.

“It’s a massive area, but we are working hard and doing our best to impact as many lives as possible and get it done correctly, “Mr. Jones said. “One of the six pillars of the Over-the- Hill Community Development Partnership Initiative talks about rejuvenation, so this cleanup effort is focusing specifically on getting the trash, bulk waste and derelict vehicles out of the area and then once we have done that, in February residents will witness the launch of our painting programme where we are actually trying to put a new face on the entire community.

Mr. Jones said empowering residents is another key component of the Initiative.

“Some of the educational initiatives we have planned for the month of February involve training persons in the communities as to how they can take lessons learnt from these cleanup initiatives and turn them into businesses – how to become a landscaper; how to use their trucks and turn it into a commercial enterprise, teaching them how to become entrepreneurs.

“In talking to the residents, many of them have very good intentions and many of them want to see the area cleaned and to remain clean, but they just needed a jumpstart, that injection. You would be surprised how an injection of capital can lead to further things, such as taking the funds they earned today and buying a lawnmower with which they can start their own landscaping business for example,” Mr. Jones added. 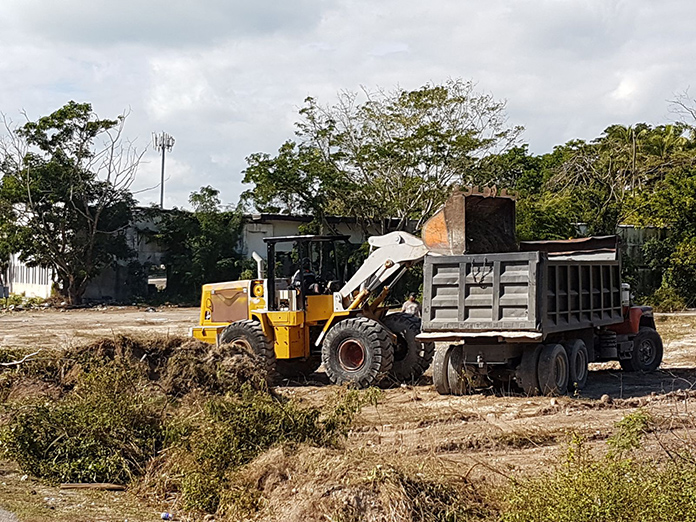