Money for Urban Renewal – WHERE WAS THE MINISTER FOR URBAN RENEWAL AT THIS EVENT? 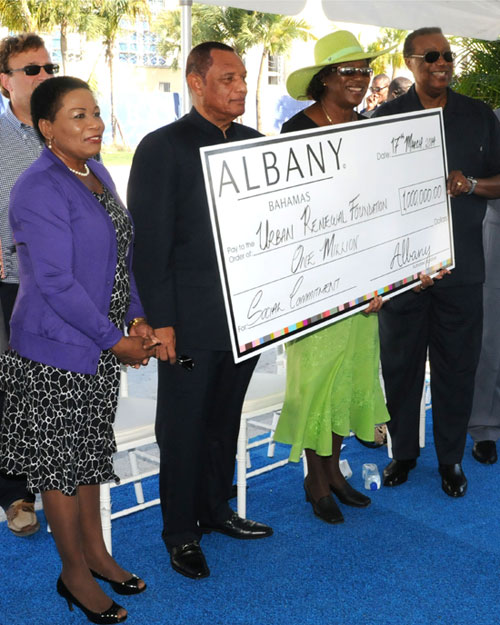 Nassau, The Bahamas – Urban Renewal received a ‘major boost following a ‘substantial ’ donation by principals of The Albany Resort. The $1 million donation was made during an official ceremony held on the resort’s compound on Monday, March 17.

Prime Minister, the Rt. Hon. Perry G. Christie, along with Co-Chairs of The Urban Renewal Commission, Mrs. Cynthia ‘Mother’ Pratt and Mr. Algernon Allen, were in attendance and accepted the donation on behalf of the commission.

Mr. Christie expressed his gratitude for the donation and said that corporate citizens such as the principals of the Albany Resort assist in placing the country on the world stage.

“Resorts such as Albany define the Commonwealth of The Bahamas in the context of being able to have a multi-faceted offering to the people of the world,” said Mr. Christie. “Investments such as these say to the world: Come to The Bahamas and you can have any type of experience that you can imagine.”

Mr. Christie said this ‘significant and sizeable’ donation speaks to the commitment of Albany to The Bahamas and the Bahamian people. He also pointed that the continued expansion of the Albany Resort would mean an additional 1300 jobs for Bahamians. Additionally, Mr. Christie said that over $140 million would be spent on the continued development of Albany over the next few years.

Co-chair of The Urban Renewal Commission, Algernon Allen, expressed his gratitude by calling the donation an ‘exceptional’ one. “This donation is symbolic and it is substantial,” said Mr. Allen. “It recognises the symbiotic relationship which is a new reality of our country, mainly that it is necessary, for any substantial investment in The Bahamas to have an investor and the country embrace each other. It also is exceptional in that it is the largest single donation made to the immediate social good of our country and, of course, it is very generous. It is symbolic of a new norm that must necessarily mandate that we develop a more socially sensitive society. We cannot avoid because if we avoid it, it will gobble us up.”

Mr. Allen said that the Urban Renewal Foundation is structured to receive grants without government interference in order to achieve its objectives. To this end, the funds will be used to assist with several projects including the Urban Renewal Band, Urban Sporting League, and The Girls and Boys Club of The Bahamas.

Managing Director of Albany, Christopher Anand, said the owners of Albany are committed to The Bahamas and the organisation is ‘here to stay.”