Nassau, Bahamas — Once again there is breaking news coming out of the Department of Environmental Health Services [DOEHS], which is headed by WUTLESS Minister for the Environment, Earl ‘Helicopter’ Deveaux.

It was back in summer of this year when BP broke the news that bogus cheques were being issued by the DOEHS, which made payments for works on green spaces and verges across the country to contractors. BP noted then that several companies were receiving cheques at the time for the same street areas, but that was just a tip of the iceberg. The scandal forced an investigation by the ministry of finance and to this day “MUMMS THE WORD” like everything else out of that department.

Questions concerning the SCANDALS were put on the floor of the House, but again, “MUMMS THE WORD”! 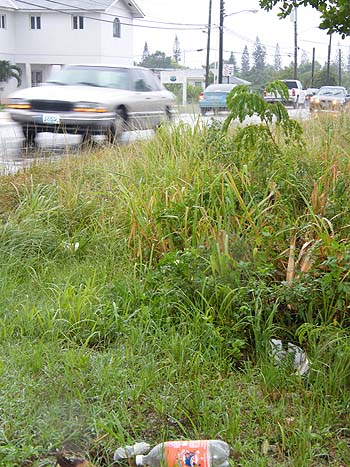 Further intensive investigations by BP aided with our sources in the department confirm a new scandal is unfolding where the public purse [THE COOKIE JAR], is being raided once again.

We can confirm a handsome contract was handed out from on high to a company operated by FNM goon, O’Brien Knowles.

BP has learnt the questionable contract of over $8,000 per month, outlines for the contractor to commence monthly cleaning service along the Carmichael Road west section of the island. We’ve learnt since June of this year, Knowles was issued the works to begin cleaning from the junction near Faith Ave. and Carmichael Road to the Coral Harbour roundabout. The details spell out the FNM goon is to trim trees, cut bush, collect debris and manicure spaces along the roadway in the said area monthly.

BP has since been alerted that while Knowles is collecting his monthly cheque from Earl Deveaux’s department, NOT AN OUNCE OF WORK HAS COMMENCE in the prescribe zone.

BP took a ride along the district for ourselves to confirm the claims made by officials in the department and what we uncovered was indeed shocking. Garbage is sprawled all along the roadway, patched with thick overgrown weeds and shrubs. The area has not been cleaned in months, yet the ministry is paying some JACKASS?

Residents reading this story must ask the questions:

In September, we raised the point how Earl Deveaux’s department was choking the poor as his ministry cancelled a license of a women selling hotdogs near the Lyford Cay roundabout.

The young woman was harassed off the government land. She, we are told, has been to all levels of the Ministry to find out what the problem is. She has been stonewalled and lied to. Finally, a senior official at the Ministry told her, “Sometimes the innocent suffers for the guilty”. It appears as if the “hogs” in Lyford Cay does not want her there. This is a Bahamian operating on crown land and the mongrels out there don’t want her or her ilk near the site. We cry shame on them! It is no wonder young people are committing suicide all over this country.

But while that young woman is eager to work and make a living, Earl Deveaux, and the WUTLESS operators in his ministry, would rather pay some general of the FNM $8,000plus to do nothing.

Individuals in the Department of Environmental Health and their WUTLESS Helicopter Minister needs to get their act together. They are only looking out for the rich and the haves, while the innocent suffers.