By Beth Jinks and Jonathan Keehner

Kerzner International Holdings Ltd., the company that built Atlantis resorts in the Bahamas and Dubai, handed ownership of its flagship property to Brookfield Asset Management as part of a debt restructuring.

Brookfield will forgive $175 million of junior debt for ownership of the Bahamas-based Atlantis and the Bahamas One&Only Ocean Club, as well as a half interest in the One&Only Palmilla in Mexico, according to a statement obtained by Bloomberg News.

Kerzner, which also reached a deal with lenders to restructure its operating debt, will continue to run Atlantis Paradise Island and the One&Only resorts, according to the statement. Atlantis the Palm, in Dubai, jointly owned with Dubai World, isn’t affected.

Kerzner, famous for Atlantis’s Mayan-themed water slides and up-close encounters with dolphins, sharks and rays, has struggled with debt since the 2008 financial crisis cut hotel values and room rates. The company has negotiated to extend maturities on about $3 billion of mortgages due earlier this year, people familiar with the talks said in August.

The properties being taken over by Brookfield had about $2.6 billion in debt when negotiations began a year ago. That shrinks to about $2.3 billion, with Brookfield’s forgiveness and an earlier $100 million payment that was part of a maturity extension. 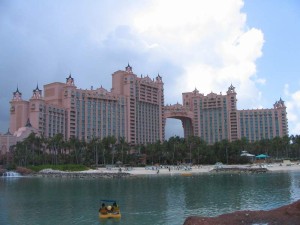 Kerzner is working with Brookfield to extend maturities of the remaining debt, according to two people familiar with the negotiations who declined to be identified because the arrangement isn’t public.

Kerzner was advised on the restructuring by Blackstone Group LP (BX), Kirkland & Ellis LLP and Zolfo Cooper, according to the statement. Centerview Partners LLP advised Sol Kerzner and Moelis & Co. advised Dubai World, a person familiar with the talks said in August.

Kerzner, 76, built what his company website calls the “mythical city of Atlantis” on Paradise Island property he bought from Merv Griffin, the late talk show host and game show creator. The resort is surrounded by an artificial open-air marine habitat featuring 50,000 sea creatures and a marina to “attract the sleek international mega-yacht set,” according to the site.

In September 2008, as the financial crisis deepened, Kerzner opened a second Atlantis in the Persian Gulf on the outer frond of Palm Jumeirah, Dubai’s man-made, tree-shaped island.