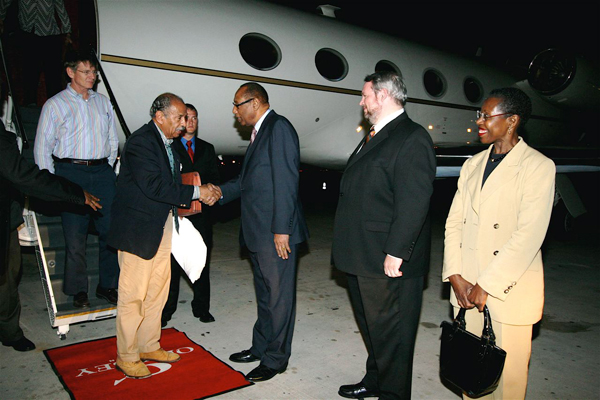 Nassau, Bahamas – The Ministry of Foreign Affairs is hosting a United States congressional delegation led by Chairman of the US Judiciary Committee Congressman John Conyers from April 7 to April 9.

Discussions will focus on joint narcotics interdiction efforts, ongoing collaborative efforts between the United States and The Bahamas in illegal drug interdiction and the current situation in Haiti.

Congressman Conyers Jr., a Detroit Democrat, was re-elected to the 14th Congressional District in November, 2006; his 21st term in the US House of Representatives.

Mr. Conyers, who entered the House of Representatives in 1964, is the second most senior member in the House of Representatives. In his 40-plus years in Congress, some of his major accomplishments include the Violence Against Women Act of 1994, the Motor Voter Bill of 1993, the Martin Luther King Holiday Act of 1983, the Alcohol Warning Label Act of 1988, and the Jazz Preservation Act of 1987. He was also the driving force behind the Help America Vote Act of 2002.

Congressman Conyers was also the original co-sponsor of a Haiti Trade Bill, which would provide duty-free status to Haitian garments that are either assembled or knit to shape in Haiti provided the yarn and fabrics are from the US or from countries with which the US has an agreement.