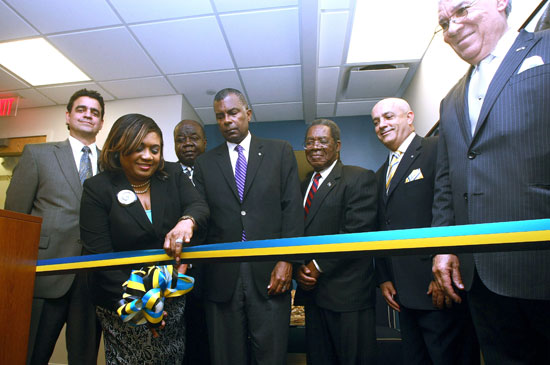 Remarks made by the Hon. Fred Mitchell, Bahamas Minister of Foreign Affairs:

There are three people that I had hoped would have been able to be here. One is the Prime Minister and the other is the Deputy Prime Minister. They both had thought that it might have been possible to attend if one could not have.  Unfortunately, the exigencies of the Parliamentary schedule made it impossible for them to attend.  Yesterday the Prime Minister gave his final budget address in this present debate and both are required to be in Parliament to answer the questions of the Parliament on the allocations of the funds estimated in the budget. I regret therefore that they are unable to be here.

This office has good reasons to be here.  I explained in the Parliament that we had been receiving complaints from fairly highly placed Bahamians in the community here that they did not think that enough attention was being paid to their interests. It was determined that we would do something about that by seeking to encourage their participation in the life of their country overseas and to bring their influence to bear on policies which might affect their country of origin.

More so, The Bahamas Government is of the view that in order to stimulate national growth and development, we ought to create synergies amongst Bahamian nationals both at home and abroad, particularly by utilizing and accessing business professionals and entrepreneurs, leveraging and harnessing their skills, partnerships and talents through greater networking opportunities and business ventures. The realization of this office, particularly in Washington, D.C., the seat of U.S. political and economic influence, offers value added contributions and serves as a tangible catalyst for bridging Bahamian constituents resident in the United States of America more closely with The Bahamas. The overarching objective is to use this office to assist in promoting The Bahamas in the domestic and international spheres.

So for Ms. Zonicle, that is job one.

I believe that she has made a magnificent start in this effort. I call it beating the bushes to ensure that more of our citizens abroad begin to engage. We shall be monitoring the results at home.

Further, we have decided as a result of the increased migration patterns of Bahamians in the United States that there is a need to bring more focused attention to the system and use of honorary consuls. Prior to our coming to office, we had not used honorary consuls in the United States, simply relying on the formal offices in the main cities that have served us since the time of independence.

The first of those was the appointment of an honorary consul in Atlanta, Georgia, Mr. Michael Young who served for 2 ½ years until the Honorary Consul’s office was converted to a Consulate General in      August, 2009.

We have now sought permission in the United States to establish honorary consuls in Chicago, Illinois; Houston, Texas, and Los Angles, California, and may also be looking at Denver, Colorado.

The idea is to have Bahamians served by people connected to the country from these locations.  Eventually, these offices will be able to deal not only with the stranded passengers, people who get themselves in trouble with law, our students, but also be able to deal with applications for visas and passports. We have identified the persons who want to serve. It now awaits the regulatory and host country approvals which we hope will be in the not too distant future.

I want to congratulate Consul General Paulette Zonicle for her pioneering work in establishing this office. I wish to thank the following individuals who were instrumental in ensuring that the work was done: Permanent Secretary of the Ministry of Foreign Affairs and Immigration of The Bahamas, Mr. Philip Miller; Ambassador Elliston Rahming who served as Ambassador designate to Washington and remains the Permanent Representative to the Organization of American States; Ambassador Eugene Newry, Ambassador of The Bahamas to the United States of America, and Deputy Chief of Mission Chet Neymour.  These persons played essential roles in ensuring that the office opened in a timely fashion and worked with our colleagues in the Ministry of Finance to ensure that the office was properly resourced.

I would also like to announce the newest member of our team Michael Fountain who is now our Honorary Consul in Chicago, Illinois.

Mr. Fountain will report directly to Ms. Zonicle. All Officers accredited to the United States will report to Ambassador Newry.

I wish to thank our counterparts in the United States government for the timeliness and dispatch with which these matters were handled.

I think it speaks well of the relationship which we have in so many spheres and endeavours.

I hope then that this office will be of service to the larger Bahamian community. I hope that it will lead to greater trade and commerce and greater engagement with The Bahamas. I hope that our students in this area will find it a place of refuge, a centre for Bahamian life and culture abroad, just as our embassy is. I have no doubt that the hard worker that Ms. Zonicle is will see the benefits multiple fold in the months and years to come.

I thank all of you for coming and I now declare the office officially open.