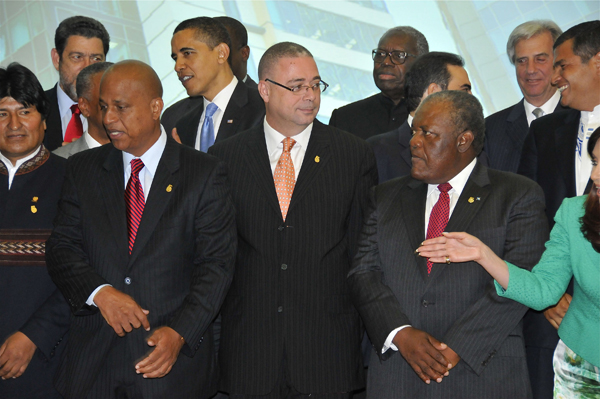 Prime Minister the Rt. Hon. Hubert Ingraham is pictured, right, as leaders of the 34 democratic countries in the Organization of American States (OAS) prepare to assemble for a group photo at the 5th Summit of the Americas, Port of Spain, Trinidad on Saturday, April 18, 2009. (BIS Photo/Sharon Turner)

The theme of the Fifth Summit of the Americas, “Securing Our Citizens’ Future by Promoting Human Prosperity, Energy Security and Environmental Sustainability“ was developed in close consultation with member countries and partner institutions of the Summit Process. The focus of the Fifth Summit will be on human prosperity, energy security, climate change and sustainable development. 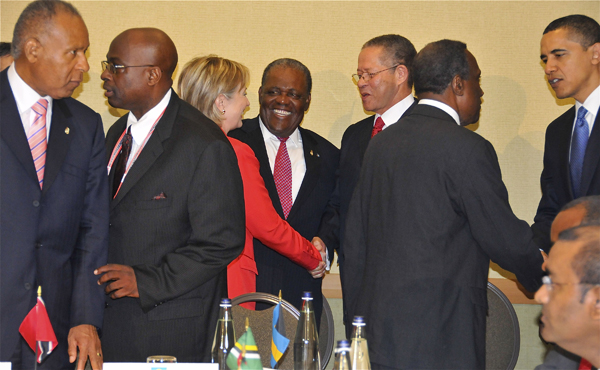 Prime Minister the Rt. Hon. Hubert Ingraham is pictured centre during a brief discussion with United States Secretary of State Hillary Clinton and Prime Minister of Jamaica the Hon. Bruce Golding prior to the commencement of bilateral talks between the United States and the Caribbean Community (Caricom) on Friday, April 17, 2009 at the 5th Summit of the Americas, Port of Spain, Trinidad. United States President Barack Obama is pictured at far right greeting Secretary General of Caricom His Excellency Edwin Carrington. ( (BIS Photo/Sharon Turner)