NASSAU, The Bahamas – Prime Minister the Rt. Hon. Perry Christie told students of The College of The Bahamas that they have an integral role to play in the further growth of the country, as he officially announced “The National Development Plan — Vision 2040.”

The event took place on Monday, November 17, 2014 at the Harry C. Moore Library at COB, “which is the most appropriate place to launch this process,” the Prime Minster said.

“I am happy that we have come to The College of the Bahamas, soon to be University of The Bahamas, which is the most appropriate place to launch this process,” the Prime Minister said at the press conference on Monday, November 17, 2014 at the Harry C. Moore Library.

Also present were: Deputy Prime Minister and Minister of Works and Urban Development, the Hon. Philip Davis; Minister of Tourism, the Hon. Obie Wilchcombe; Minister of State for Investment in the Office of the Prime Minister, the Hon. Khaalis Rolle; President of The College of the Bahamas, Dr. Rodney Smith; Robert Pantzer, Senior Specialist, Inter-American Development Bank; and members of the National Development Plan — Vision 2040 Secretariat headed by Dr. Nicola Virgill-Rolle, of the Ministry of Financial Services.

The Government of The Bahamas, in cooperation with the IDB, which injected $450,000 into the project, has commenced the process of the development of a long-term National Development Plan – Vision 2040. The three-phased plan calls for a comprehensive economic strategy to be integrated into the operational policies of the Government and also guide the budgeting process.

Speaking directly to COB students assembled at the press conference, the Prime Minister said as young people they have “an obligation” to know this country and that they are entitled to be the best in this country. 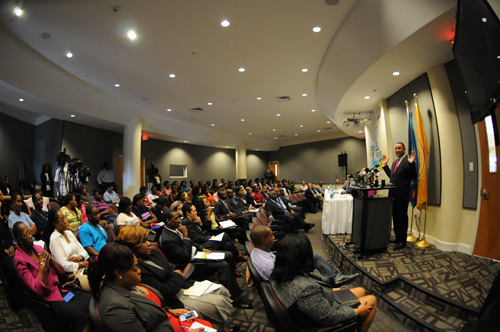 He said that there are Bahamians in the Family Islands — from Grand Bahama in the north to Inagua in the south – who want the same thing for their children as those in New Providence. And, that his view is predicated on there being a University of The Bahamas, an institution of which they represent.

“We must take ownership of the plan and essential to that is The College of The Bahamas,” the Prime Minister said.

He acknowledged that although The Bahamas has been extremely successful as a nation, it could be more successful when plans are strategically coordinated with all stakeholders in the implementation of those plans.

In this vein, he met with IDB representatives and asked for assistance in bringing a more structured and institutionalized approach to planning for development to the Government.

“Through this plan we hope to elucidate a shared vision for The Bahamas,” the Prime Minister said.

The plan calls for the collaboration among the Government, private sector and civil society and focuses on developing a comprehensive and publicly discussed long-term economic development strategy. A National Development Plan that will guide Government’s policy decisions over the next 25 years.

Phase 1 of the Plan (October 2014 – February 2015) calls for the creation of the evidence base and SWOT analysis to include in-depth situational analysis including Socio-Economic, Physical and Environmental Assessments (SPEA) and Institutional and Governance Assessments (IGA);

Phase II (March 2015 – April 2015) – Vision and strategy formulation through the five interactive workshops with stakeholders on vision, national goals, outcomes, and the monitoring and evaluation mechanism; and

The Prime Minister has instructed the officers working on the plan that it be as inclusive as possible. “Chief among this is that we must reach out to all political parties. This nation will not have a sustainable plan if some are excluded from the process of developing,” he said.

The Government has also partnered with the IDB to implement greater results-based management within the Public Service.

In this vein, the IDB is developing a computer application (an App) to help the Office of the Prime Minister to monitor progress with the key goals elucidated through the development plan.

“We are designing a governance arrangement around this reporting tool to ensure that it is used appropriately and that public servants are held accountable for reporting their progress in achieving the Government’s key initiatives. We feel that the addition of this tool will make Government more responsive and more accountable to its citizenry,” the Prime Minister said.