Nassau, Bahamas — In a bad call on the DNA candidate for Bain and Grants Town, Bahamas Press tonight acknowledges the  nomination of Rodney Moncur with the Green Party.

Moncur on Hard Copy with host, Steve McKinney, aired on Love97Fm this afternoon announced his confirmation as the candidate of the DNA. Moncur castigated Bahamas Press and it hardworking agents in the field, just short of calling us workers of the devil and agents of evil.

We assure ‘Da Hammer’  Moncur, that his declaration today was as a direct result of our reports and intervention on his behalf, but that is here nor there.

We want him to know, that he and his ‘Axis of EVIL’, Hubert Ingraham, could talk and conclude who BP is all they want, but we want them both to know the people who make up Bahamas Press will heap coals on both of them.

Moncur would recall that back in 2007, he was alleged to have been a “paid agent” of the FNM!

Two sources with first hand and eyewitness knowledge confirmed to BP that Moncur picked up t-shirts and possibly cash from a known Ingraham crony at a club on Blue Hill Road during the run-up to the 2007 elections. The T-shirts read: Rastas for the FNM!

Bahamas Press contends that Moncur is an agent of Satan Himself [THE FNM/PAPA]. And he cannot deny it!

We say to Moncur when you come, come with clean hands! Tonight, because of his crude attacks against us in the public domain, all agents of BP stand on HIGH ALERT AGAINST MONCUR!

Tell Rodney Moncur and Hubert Ingraham they need not talk together in quiet circles about Bahamas Press anymore. We will continue to report.

Our sources in the DNA confirmed that Moncur and Jaques were selected because both men cannot win the seats and the Party do not intend to put any money behind them.

We want to ask Branville and the DNA if they ever wondered how Rodney Moncur got appointed a Justice of the Peace. The appointment is reserved for political cronies and forwarded to the Cabinet of the Bahamas for approval. WHO IN THE CABINET RECOMMENDED ‘DA HAMMER’? Was it Carl W. Bethel? Was it Papa? Or was it both?

How did that happened? Things that make ya go hmmmmmm!

Bahamas Press apologies to our thousands of readers for our wrong call on the Moncur appointment, and we say to Moncur stay tuned, there is more to come and you shall surely see the good Works of God!

The FNM and the DNA share the same genetics. 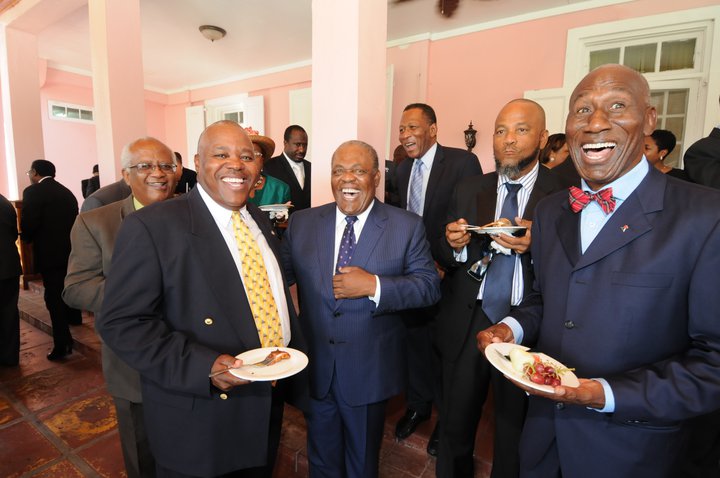 Hubert Ingraham along with his FNM goons at Government House Nov. 2010. The group could be seen eating and drinking while Rome burns! Rodney Moncur breaks bread with PAPA!