Boy when I look at this picture only one thing comes to mind – The Bahamas must have oil!

Ambassador Newry, his wife Mrs. Francoise Torchon Newry and other members of his immediate family were escorted in a motorcade with police outriders from The Bahamas Embassy on Massachusetts Ave, N.W. to the White House by Mr. Tom Moran, Office of the Chief of Protocol, U.S. Department of State, for the 3:30 p.m. credentialing ceremony.

In presenting his credentials, Ambassador Newry told President Obama that one of “your recent predecessors stated that the United States and The Bahamas are not only friends but we are family.”

“It is from that perspective that I present to you my country’s formal Letters of Credence,” Ambassador Newry said. “I also bring my Prime Minister’s greetings and wishes of peace towards all people of goodwill this season.”

Ambassador Newry added, “The United States and The Bahamas have, among the nations of the New World, the oldest of friendships and family ties. Among our earliest post-Columbian inhabitants were settlers from the Carolinas and Virginia, both Europeans and Africans. In the epic War of Independence, struggles of the Civil War, and Prohibition, annals of history show the role of The Bahamas and the presence of Bahamians.”

The Bahamian envoy noted that the State of Florida “bears the greatest mark of the Bahamian presence to this day where United States citizens of Bahamian heritage outnumber the total population of the archipelago of The Bahamas.”

“World War Two saw valiant Bahamians join the Armed Forces of the United States in the fight against Nazism. Jointly, though in a different sphere, Bahamian men and women worked as part of the war effort as contracted workers on your great farms on the eastern seaboard replacing your sons serving in the Armed Forces,” Ambassador Newry said. “The illustrious educators, Mary Bethune Cookman and W.E.B. Du Bois helped advance the cause of their fellow citizens against monumental odds and both claim Bahamian ancestry. The great artists Bert Williams, Sir Sidney Poitier, Esther Rolle, Roxy Roker and professionals such as Al Roker of the Today Show all are descendants from the Isles of June.”

Emphasizing that the economies of The Bahamas and the United States “are inextricably intertwined,” Ambassador Newry said one of his “roles is the strengthening, extending, reinforcing and perpetuation of these in a spirit of mutual benefit extending, of course, into the realms of national security, migration issues, ocean pollution, fisheries and other natural resources.”

“Our shared views on many global issues will remain pillars of our foreign policy together with those of our CARICOM family, though in friendship we will remain vigilant and ready to advise on issues which we feel are in our mutual interest,” Ambassador Newry said. “On behalf of the people of the Commonwealth of The Bahamas, I thank you for your acceptance of my Letters of Credence and may God continue to bless the United States of America and the Commonwealth of The Bahamas.”

In his response, President Obama noted that The Bahamas and the United States “share a long friendship based on mutual commitment to democracy and freedom, a commitment founded in strong and historic ties.”

“The United States has had close economic, commercial, and cultural relations with The Bahamas that predate our independence,” President Obama said. “Few people know that, until the early 1700s, The Bahamas was actually as part of the Carolina land grant.”

The President added, “Through the centuries, pirate ships sand rum runners have given way to cruise ships and tourists, and the citizens of our countries continue in frequent contact with each other. This includes the ever-increasing number of Bahamian students studying in the United States, the more than 110 U.S.-related businesses in The Bahamas, and the nearly 5 million annual American tourists that visit The Bahamas to enjoy the magnificent natural and cultural heritage of The Bahamas.”

Continuing, Mr. Obama said the United States and The Bahamas “have a shared interest in ensuring the security or our citizens and visitors, and we recognize the importance of combating crime and illegal activities that threaten us both.”

“This is why our two countries join in common purpose and methods to ensure the safety of our citizens,” President Obama said. “For example, the U.S. government partners with Bahamian law enforcement in Operation Bahamas Turks and Caicos to deter, interdict, and thwart the trafficking of narcotics. This security agreement stems the flow of illegal drugs transiting The Bahamas, dismantles drug trafficking organizations, and strengthens the sharing of information among our governments.”

He added, “Also, through the Caribbean Basin Security Initiative, the United States provides extensive training to enhance the criminal investigative capacity of Bahamian law enforcement. Our cooperation and assistance benefits all of our citizens, and our countries must continue working towards these shared goals and commitments. Mr. Ambassador, I look forward to working with you to advance our common agenda and deepen the strong and abiding friendship of our countries. It is a pleasure to welcome you to Washington.”

A neurosurgeon by profession, Dr. Newry was The Bahamas’ Ambassador to the United Nations before being appointed Ambassador-Designate to the United States on August 19, 2013. He previously served as the ambassador to Haiti and the Dominican Republic from 2002-2007 under the first Christie administration. 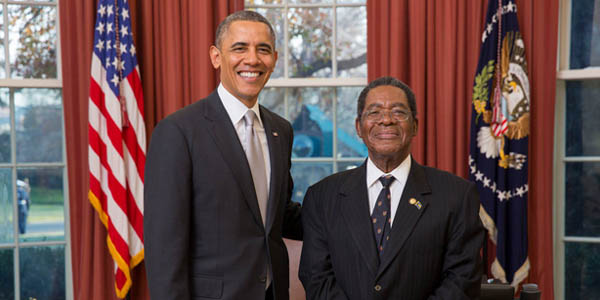