London — BBC TV presenter Komla Dumor has died suddenly at his home in London at the age of 41, it has been announced.

Ghana-born Dumor was a presenter for BBC World News and its Focus on Africa programme.

One of Ghana’s best-known journalists, he joined the BBC as a radio broadcaster in 2007 after a decade of journalism in Ghana.

Ghanaian President John Dramani Mahama said on Twitter that his country had lost one of its finest ambassadors.

He was “committed to telling the story of Africa as it really is,” Mr Horrocks said in a statement.

“Africa’s energy and enthusiasm seemed to shine through every story Komla told”.

“Komla’s many friends and colleagues across Africa and the world will be as devastated as we are by this shocking news.”

Komla Dumor featured in New African magazine’s November 2013 list of 100 most influential Africans. It said he had “established himself as one of the emerging African faces of global broadcasting”, who had “considerable influence on how the continent is covered”. 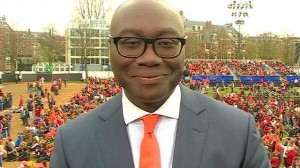 James Harding, BBC Director of News and Current Affairs, spoke of Komla Dumor’s “singular role in transforming the coverage of Africa”. “He brought a depth of understanding, a great deal of courage, a joyous charm and boundless charisma to his work,” Mr Harding said.

He graduated with a BA in Sociology and Psychology from the University of Ghana, and a Masters in Public Administration from Harvard University.

He won the Ghana Journalist of the Year award in 2003 and joined the BBC four years later.

From then until 2009 he hosted Network Africa for BBC World Service radio, before joining The World Today programme.

In 2009 Komla Dumor became the first host of Africa Business Report on BBC World News. He was a regular presenter of Focus on Africa and had fronted the programme the day before he died.

He travelled across Africa, meeting the continent’s top entrepreneurs and reporting on the latest business trends around the continent.

He interviewed a number of high-profile guests including Bill Gates and Kofi Annan.

Last month, he covered the funeral of former South African President, Nelson Mandela, whom he described as “one of the greatest figures of modern history”.

He anchored live coverage of major events including the 2010 World Cup in South Africa, the funeral of Kim Jong-il, the release of Israeli soldier Gilad Shalit, the Norway shootings and the wedding of Prince William and Kate Middleton.

In his review of 2013, published last month, Dumor said the passing of Mandela was “one of the moments that will stay with me”.

“Covering the funeral for me will always be a special moment. I will look back on it with a sense of sadness. But also with gratitude. I feel lucky to have been a witness to that part of the Mandela story.”

Meeting Komla Dumor for the first time in Ghana in 2007, BBC chief international correspondent Lyse Doucet said she had noticed how young Ghanaian journalists looked up to him.

He never flinched from asking tough questions, but also loved to share a laugh, she says.

She adds that Komla Dumor had many loves including football, his faith, his family: “He always said ‘I just love talking with people’.”

Initially, Dumor studied medicine but he changed course and graduated from the University of Ghana with a BSc in Sociology and Psychology and from Harvard University with an MA in Public Administration.

He is married to Kwansema, with whom he has three children.

Meanwhile, sources say, his family is set to make a formal statement about the news in a short while.