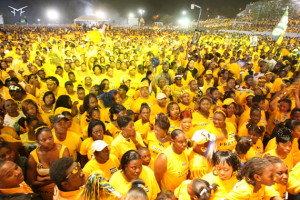 Press Statement
By
The Progressive Liberal Party
September 11th 2011
BEC’s New Abaco Power Plant initially budgeted at $90 Mil escalated to $120 Mil and further costs overrun of $10 Mil to go
The record will reflect that BEC’s Board of Directors in the latter part of 2006 approved a contract for the installation of four new generators and a Power Plant in Snake Cay, Abaco. Upon coming to office in May 2007 the contract was ‘stopped, reviewed & amended’ to change the site from Snake Cay to Wilson City at considerable expense (new road, transportation of fuel) to BEC.
The records will also reflect that only after the new Plant was finally completed it was remarkably discovered that new transmission lines were necessary and the ensuing mandatory exercise, to correct this oversight, took almost eight months to complete.
During a recent visit by the Leadership of the PLP to Abaco it was brought to our attention that both the new and old Power Plants were operational. Needless to say we were shocked but this was only the tip of the iceberg, as we were further informed that special transformers, a new switching system and a sub-station are required to complete the project. This remarkable discovery, which has not been publicly disclosed, will add millions of dollars beyond the expenditure to date of $120 million.
The cost of running two power plants is absolutely outrageous and ridiculous and a massive waste of BEC limited. The PLP has been advised, however, that it will take more than a year to acquire the additional equipment, as provision has to be made in the new fiscal period budget, beginning October 1st 2011.
The program left by the PLP Government in 2007, was to ensure a reliable source of electricity for the People of Abaco. As a result of this government’s infamous ‘Stop, Review & Cancel (or amend)’ policy, Abaco has suffered for massive power outages during the summers of 2007, 2008, 2009, 2010 & again in 2011. Tourism during these past five summers has suffered greatly, notwithstanding the many promises of the FNM Government that the power outages would cease in Abaco.
Is this a Government that you can trust?
The Progressive Liberal Party demands that PM Hubert Ingraham, Ministers Earl Deveaux and Phenton Neymour definitively, and without equivocation, provide the expected date that the long overdue new Abaco Power Plant fully comes on stream? The nightmare needs to end for the good people of Abaco, who continue to suffer at the hands of a visionless and reckless FNM Government, whose management of BEC’s Abaco Power Plant has been destructive and costly.
This pattern of calamitous mismanagement of BEC is sadly being widely experienced, particularly in New Providence and is reflective of the overall destructive course the FNM has taken the entire Bahamas on since their return to office. The quality of life for lower and middle income Bahamians, who can least afford it, have been greatly diminished under this outgoing FNM Administration.