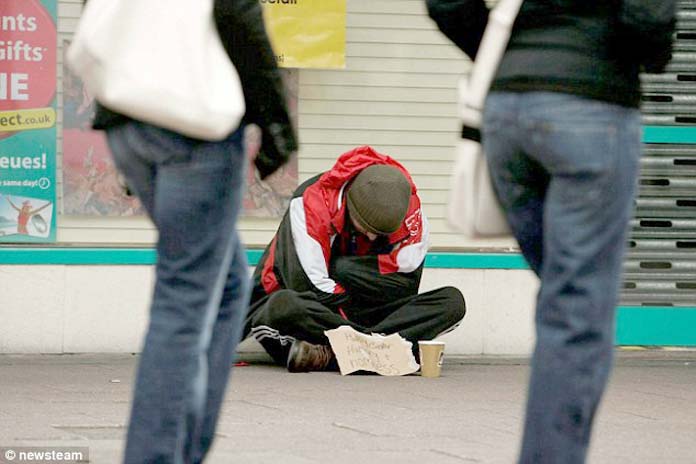 Begging has become a permanent feature of our social mosaic and has now reached alarming sub human levels. No building, no edifice, no enterprise is sacrosanct. The beggars are everywhere and many are demanding and ultra-aggressive. I remember the days when the sanctity of the church, was at the top of the totem pole of sanctum sanctorum (holy of holies). Now the sacred building is just another place to seek refuge and to invade even during services.

George Orwell says: A beggar, looked at realistically, is simply a businessman, getting his living, like other businessmen, in the way that comes to hand. He has not, more than most modern people, sold his honour; he has merely made the mistake of choosing a trade at which it is impossible to grow rich.
Orwell is somewhat right but also woefully wrong. He probably never heard of The Bahamas where begging is a lucrative occupation.

The beseeching, the pleading, the entreaties are not overnight phenomena. The sleeping on pavements, in bus stops and in doorways didn’t begin yesterday. The cancer was evident for years but because the malaise didn’t encroach on our personal territory, we evinced no concern.

We the people, have to tackle this gargantuan problem with a sense of extreme urgency. Times have changed. This is no longer the society where family members looked out for others. Senior citizens and young people roam the streets, unwashed and disheveled.
Many resist the efforts to get them off the streets saying they could not handle conventional jobs because of mental illness, physical disability and lack of skills.

Many countries get tough with beggars. In Denmark, begging or letting a member of your household under 18 is illegal after being warned by the police and is punishable by six months in jail.

China, according to their laws against organizing disabled or children under 14 to beg is illegal and is punished by up to seven years in prison. Denmark, Greece and Hungary have similar harsh penalties. Even picking things from rubbish bins is outlawed.
Those countries and others have adopted draconian measures.
Perhaps we need a completely different approach.