The Bonefish legend is laid to rest in West End

But before Bonefish Folley was laid to rest that morning, his sons, Simon, Thomas and Carl Rolle came up with the idea to have a flotilla follow behind the boat carrying the casket of the legendary fisherman. When the sons approached several boat owners with the idea of the flotilla it was immediately well received from the local fisherman in the quaint fishing village of West End.

The stage for the event began at 9:30am that morning when the hearse carrying the legendary fisherman arrived at his home and was immediately transferred to the fishing boat used by Folley to take his clients on many memorable bonefishing excursions. 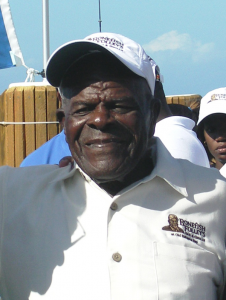 Born in the island of Andros, Bonefish Folley was a humble man who truly enjoyed fishing. As a young man he made his way to Bimini where we began to learn his trade that would lead him on his way of becoming one of the Bahamas well known “tourism ambassadors”. Some years later Folley found his way to West End as the tourism industry was starting to take hold with the opening of the former Jack Tar Hotel that began flying in tourists from the U.S. and Canada for many years.

Folley has hosted a number of celebrities throughout his life including – Ernest Hemingway, Curt Gowdy, Lana Turner, Martin Luther King and President Richard Nixon. Folley is the recipient of the Bahamas Ministry of Tourism Cacique Award that recognizes individuals who have demonstrated exceptional customer service, knowledge of their chosen profession and genuine hospitality to the many customers served throughout their career.

Immortalized in song by Bahamian musician Phil Stubbs who sings about the man who is “meek and lowly, he is the one and only” Bonefish Folley. The song is still a popular tune heard on radio stations and dining establishments throughout The Bahamas. In 2006, Old Bahama Bay Resort and Yacht Harbour dedicated a restaurant in his honor and is a must-stop for boaters who want to view the photos and memorabilia of this great fisherman.

Bonefish Folley…a fishing legend will be missed by his family and friends from around the world.