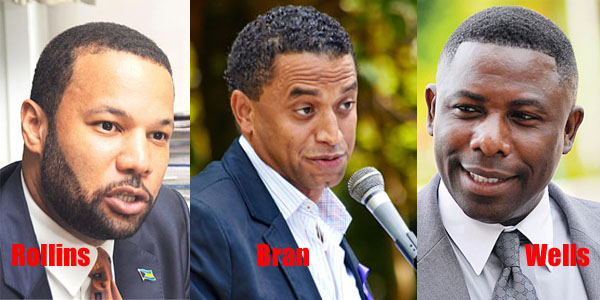 Nassau, Bahamas — The stage has been set and it appears that there are many plots unraveling in the politics of the Bahamas.

Yesterday former NDP members Renward Wells and Andre Rollins joined forces with the Free National Movement after being told to get lost by the Bahamas Democratic Leader Branville McCartney.

Both Rollins and Wells have no political capital in the country and were both fired by PLP VICEROY Philip Brave Davis!

McCartney told the media he didn’t want Wells or Rollins because when they had their chance to join his party they didn’t. But Branville will soon have no choice but to join Wells and Rollins in the FNM as there appears to be no real followers in the DNA! Roscoe Thompson went back to the FNM! Rodney Moncur ran back to the FNM foaming at the mouth! Nicholas Jacks ran back to the FNM and former DNA party Chairman Mark Humes has went home to the FNM! Bran is like a cheese standing alone and is getting spoiled by the minute!

But while Minnis holds two small half politically dead pilchards [Rollins and Wells] that were already dying on the political shoreline, the big grouper catch perhaps in all of this is current Marco City MP Greg Moss who remains an Independent Member of the Parliament.

Moss is sitting quiet and has said nothing. He certainly sees political death by joining the DNA and so what yinner think GREG MOSS WILL DO?!

Meanwhile the DNA Chairman Andrew Wilson blasted Wells and Rollins for their decision to join the FNM and issued the following statement:

The move by Renward Wells and Andre Rollins to cross the floor and join the Free National Movement gives me an eerie feeling of Déjà vu. It was just three short years ago, when these very men, then part of the NDP, blasted the Christie led PLP for what they called, at the time, their corrupt practices. Days after proclaiming their adamant opposition to the PLP, however, these very men joined the ranks of the PLP after being promised nominations – which they eventually won. Until recently, these very men were part of a government which blasted the Free National Movement as ineffective and lackluster.

And now, these very men, under the guise of a desire to move the country forward, have joined the ranks of the Free National Movement. Their actions speak volumes. Clearly this move, like the one before it, has nothing to do with moving our country forward, but rather about securing for themselves the necessary political power required to keep them in the lifestyles to which they have become accustomed. They have proven only that they are political opportunists who are prepared to do whatever they feel necessary to hold onto the reins of power.
–END—

We note the DNA, whose leader himself have been caught in several untruths by BP, had nothing to say about the LOI or another scandal of credit cards which is now being investigated at the Gaming Board where Rollins served!

And we know why!