Remarks by Philip ‘Brave’ Davis At the PLP’s Eastern Conclave :

My brothers and sisters, I am happy to report that in a few months we will go the polls and retire this clueless crew…

Have you ever seen a lot that is so lost?

Have you ever seen a crew that has gotten so much so wrong so quickly?

PLPs make no mistake about it…by every measurable standard Hubert Ingraham and the outgoing FNM Government have failed the Bahamian people…just read the headlines from the newspapers recently:

“Shops close and workers fired due to road closures”
And on and on!!

Now…in the months to election, in the short time before we give them their pink slip…they are trying every trick in the book to win.  They are granting citizenship like it is going out of style!   They are giving land away like there is no tomorrow! It is all in their vain attempt stay in power at any cost!  They are putting their thirst for power above the national interest.

I am here to tell you though that Bahamians have not been fooled…Bahamians see what they are trying to do.

This outgoing Government was trying to maneuver in the shadows, and passing deals underneath the table. This is a ghost-move government and I cry shame on them!

But you must stop this Bahamas, you must VOTE THEM OUT!  Help them have the encounter with reality that they so badly need!

PLPs listen to me carefully…there are people who deserve the right to be called Bahamians, but my Mama always told me that how you do things is just as important as what you do!  Things must appear to be done in decency and order all the time.

They do things too hush-hush…everything on the down-low!   With doors open to their special friends but closed to you! It can’t be like that!

Bahamians have a right to know what you doing and how you doing it and then if they don’t like it they have a right to object and show their disapproval! Bahamians deserve better and have a right to demand it.   That’s democracy…the right to govern yourself.  The right to choose what goes on and how it goes on! That’s your right! After all this is your country and it ought to be all about You!

The FNM doesn’t care about average Bahamians who keep our country functioning daily.

Could you imagine that? The FNM Government took Customs and Immigration workers to court seeking to stop them from expressing their voice against this Government!

These fellas have fumbled so much that they have the whole country stressed out and on edge!  You can’t drive ten feet before knocking over a cone.

Businesses are closing left, right and centre.  Just look at what is happening here in the Eastern District of New Providence. It’s a disgrace!

Our poor police force is working double-time to beat crime back.

I believe that the Commissioner and the honorable men and women of the Royal Police Force are doing the best that they can.  What more can they do?

The murders continue, people everywhere afraid, families, homes and jobs threatened by the increase in crime…and Papa gets on tv to brag about his roads, roads built by foreigners and special interests, roads built without consulting local businesses on impact, roads paid for by debts that our children, grandchildren and even great-grandchildren will have to shoulder.

But not one of them in the FNM has decried the level of violence and made an appeal to the Bahamian people for peace!

Anyone listening to the Bahamian people would know their number one priority – fighting crime.  But you aren’t listening, Papa, are you?  You’re too busy DECIDING.

You DECIDED to gut Urban Renewal.

You DECIDED to end school policing.

YOU DECIDED to end Swift Justice.

YOU DECIDED to end the Witness Protection Program.

Smart PLP policies, award-winning policies, internationally recognized – but you DECIDED to put politics first, not Bahamians first, and you DECIDED to reduce or end these crime-fighting programs.

Because I’ll say it again, the biggest decision you’ve made is to take a pass on fighting crime.

Four and a half years have passed and still the FNM has yet to present the country with a single real plan to fight crime.

It always amazes me when I hear men like Tommy Turnquest speak.  These same fellas when in Opposition repeatedly said that Crime is the PLP’s fault!  They even said, “Get rid of the PLP and you will get rid of crime”, do you remember that?

Running a country involves solving problems man!  Solving problems that move this country forward! But Ingraham and his Cabinet seem better able to ruin our Country than run it! That’s what happens when you put “I” in everything. If Ingraham the big I ain’ in it you could forget it. So instead of R.U.N. run the Country, we get R.U. big I. N ruin the country.

The next Government of The Bahamas – a PLP Government lead by Perry Gladstone Christie will lead and be tough on crime.  A reduction in crime will be our number one priority.

We will engage the best and brightest in the country to develop new crime alleviating strategies.

We will reintroduce a proper and wide-reaching Urban Renewal program and give it the resources it deserves.

We will increase financial, technical and training resources for the Police to set up a more effective intelligence unit, with the ability to act swiftly upon improved intelligence.

We will strengthen penalties and enforcement for those lousy fathers who refuse to comply with child support orders.

We will provide contracts to community leaders for the upkeep and maintenance of parks and public spaces within their community to foster a sense of pride and ownership and act as a social deterrent to criminal activity.

We will invest in the Bahamian people.

With all these naïve fellas running around talking about “change” and “new” we have to properly define what it all means. The PLP has felt the call of a new generation, too – have you seen all our exciting new candidates, young people ready to bring their energy and new ideas to the table?  We have the best team out there – no one can doubt it.  Man, they are fired up and ready to go, and firing the rest of us up, too!

And when you vote, you better consider the whole team, because let’s get real – we’ve seen what one-man bands can lead to! Yes, the PLP team is mixed with experience and the energy of young and dynamic new players. I believe you call that balance. And this Country needs balance.

When you have a big I, one man band like we have now some of the decisions you live with is a government – raising taxes during a recession when every sensible nation was helping citizens not hurting them; increasing the national debt to build projects for their friends; taking a pass on crime, failing to create jobs!

PLPs, I’m telling you, forget the distractions. The challenges we face loom large on the horizon.  There is much that has to be done!

Our values come from our proud traditions and our historic achievements, and we are going to combine those values with a modern, innovative vision for the Bahamas.

Are you ready for us, Bahamians?

We are going to be talking to you about our plan to fight crime.

We are going to be talking to you about our jobs plan – jobs for BAHAMIANS.

We’re going to be talking to you about help for first-time home buyers, support for small business and entrepreneurs, and a first-class education.

We are going to keep Bahamian industries in Bahamian hands, where they belong.

Do not cease, come on children, don’t you get weary, don’t get tired, do not let up for PAPA is about to RING THE BELL!

Thank you and good night and God Bless! 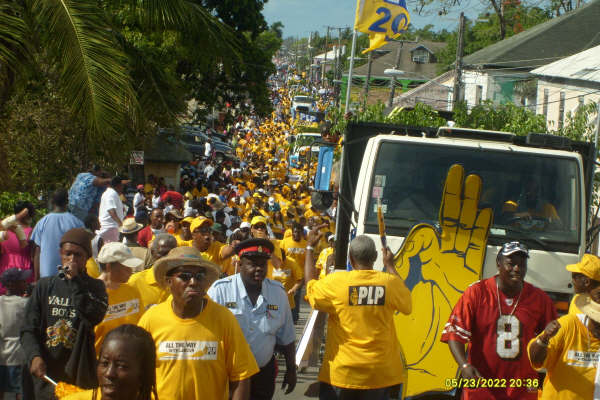