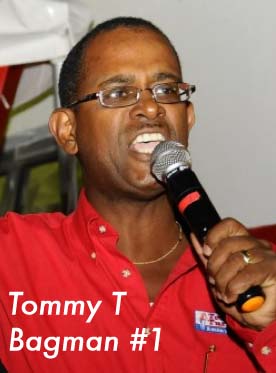 Nassau, Bahamas — Offices of the Department of Immigration is the latest government office to be ransacked by bandits this morning and police are still on the scene.

Last week the Supreme Court and the Nassau Street Court was vandalized. A few weeks earlier the Passport Offices were also broken and the home of Justice Neville Adderley was raided by thugs in Lyford Cay.

A few months ago Justice Rhonda Bain was wrestled to the ground by a Rwandan looking gangster and robbed of her cash as she exited the ABM on east Bay.

Yet in spite of all this, Tommy Turnquest says, “Crime is Under Control”. Well by DAMN! TOMMY GATS TO GO!

Had this been any other minister, Ingraham would have gotten rid of them long time ago; as he did with Carl ‘UNDERNOURISHED’ Bethel, Neko Grant and took NIB from Kenneth ‘Da Janitor’ Russell.

Was there a deal after he destroyed Tommy? Ingraham is now the Nation’s SPINELESS PUSSY CAT!

He has now shame…WE NEED CHANGE!