London, UK — Bahamas Press now focuses our attention on the financially strapped Corporation BEC, an organization ran into the ground by the Free National MOVEMENT Government.

Many would remember the announcement by Ingraham to place the public asset [BEC] up for sale the same way the government is agreeing to sell 51% of BTC.

You would also remember the government back in 2008 made a Cabinet decision to disconnect more than 6,000 Bahamian families from power supply, while pole #44 was erected in a Haitian village in the Fire Trail community.

BEC is in financial trouble. Last year someone hinted they made money but they tell us soon and very soon jobs at the Corporation will be lost. The state of affairs at BEC under the FNM was so dire we are told it forced former Chairman, Frederick Gottlieb, to resign.

No one in the Bahamas knew why an FNM chairman under an FNM government would fold up his tent and study war no more. Members of the WUTLESS MEDIA never questioned the former politician asking what were reasons for his actions, nor has anyone asked the embattled “SCANDAL RIDDLED” Minister, Earl Deveaux, what was the reason[s] for Gottlieb’s departure. All we know is BUSH CRACK and man GONE!

BP on the other hand intentionally stalled the publishing of these revelations because we wanted to test the media on this one, and boy they’ve failed the people BIG TIME!

We have been shown documents, which has given us conclusion for Gottlieb’s resignation. Additionally, with all the concerns by workers, BP wonders where is the President of the Bahamas ELECTRICAL Workers Union? Can anyone tell us where has the FNM goon disappeared? We cannot find this Jerry Roker in town, nor could we hear his voice on the abused workers at BEC, who are being called everything but a child of the Master. But what we do see is indeed INCREDIBLE to say the least.

We are told Dennis G. Williams, President of the Bahamas ELECTRICAL Workers Union, has also abandoned the workers at BEC and is nowhere in sight here in the Bahamas. WHAT THE HELL IS THIS?

Documents shown to us confirm there are some serious allegations between BEC, The UNION’S Executive Committee and perhaps the helicopter man in the upper echelons of the Cabinet of the Bahamas.

We are told according to our source, thousands of dollars is possibly being raided from the BEWU’s bank accounts, and this is where our story gets juicy.

One source alleged much of the money has been collected into the bank account of the sitting president, who we are told is somewhere in London, [OUTSIDE OF THE BAHAMAS] on leave.

Williams we are told is in the UK at this hour studying law??? Documents shown to us tell us he was granted a SCHOLARSHIP AT THE TAXPAYERS EXPENSE by the FNM Government! WHAT THE HELL IS THIS? And the story gets interesting.

The man who suppose to be fighting for the jobs of the people we are told has been dipping into the Union’s COOKIE JAR with the assistance of some members of his executive steering committee of the Union.

Thousands upon thousands we are of Union funds are written to Williams from the organization’s Royal Bank account. BOY THIS SOME DEEP DODO EH?

In one case alone information shared with us proved some SIXTEEN THOUSAND TWO HUNDRED DOLLARS [$16,200] of union funds were written on a cheque made payable to: Dennis G. Williams president of BEWU on the 7th of July, 2010. Readers should note and be reminded, Williams is not in the Bahamas and he is nowhere near his chair as president of the Union. So why is money being netted to his account?

Bahamas Press calls for Union membership at BEWU to urgently call a meeting to quickly find out where its money is going. They need to quickly investigate where all the dues are going and STOP IT QUICKLY! And from what we saw, ain’t much money left in that bank account.

We at BP have witnessed the facts and can prove something sinister is happening between the BEWU President and the high ups in the Cabinet of the Bahamas! We shall reveal more…STAY TUNED!!!!

PS: OH! and for those who thing we are just typing to hear ourselves, please look below and examine one of the many cheques shown to us. 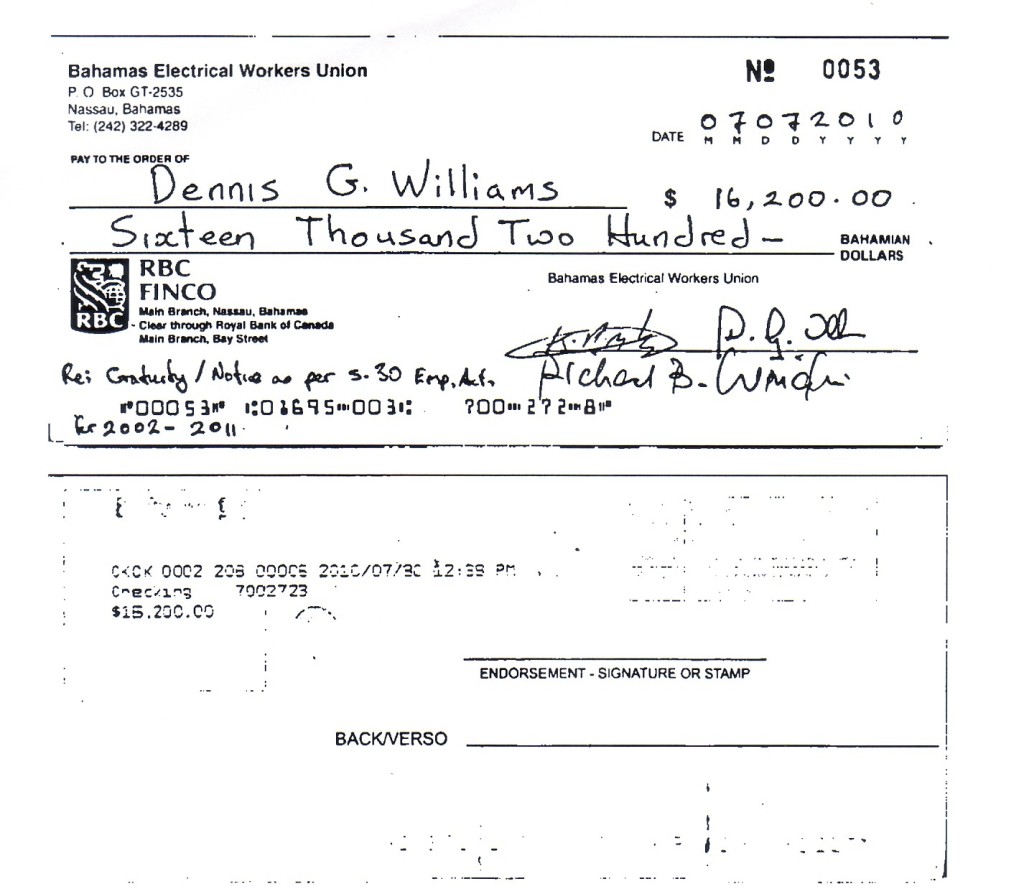