Nassau, Bahamas — Carl Bethel has turned into an old man over night as friends close to the sacked former minister of education tell us, he could be denied a nomination in the Sea Breeze Constituency.

Papa has for months contemplated a strategy to sack the Chairman of the FNM, particularly following statements in the press about nomination in Long Island and following the resignation of women in the FNM Association on Grand Bahama after fallout with Bethel, but here’s the story.

A land dispute, ended in a Supreme Court decision to award costs to Arawak Homes after the failed bid by Bethel, who coached squatters in his constituency to challenge the matter ended, for his own selfish political gains. Now with someone having to pay the piper, Bethel has disappeared, vanished off the political scene and some tell us, is near to abandoning the Party’s headquarters.

We are told the Leader of the FNM stood with glee upon hearing the news of the decisions by the court, with the winners now set to serve papers on Bethel’s clients. Papa we are told pointed those seeking those cost to go and look for the man who may no longer be Chairman of the FNM.

FNM insiders tell us, “Bethel has become heavy baggage inside the Party and perhaps any day now we can her him resigning as Chairman of the organization.

“We are disturbed to say the least to see someone in our ranks to have been so selfish, acting like a trickster knowing full well the persons on the land had no right to be there. He has now thrown the Party off focus, at a time when we need all hands, feet, hip and legs on deck. We have a Chairman who is distracted, fighting for his political life in Sea Breeze, and thrown into a legal quagmire that is like quicksand. He is not on his game and if he remains as Chairman the Party will suffer dangerously at the polls.”

Meanwhile the Chairman of the PLP, Bradley Roberts has changed his name from ‘BIG BAD BRAD’ to ‘Cannon Bradley’ as his oiled, organized PLP machinery is already mobilized for political combat.

The Christie, Davis, Roberts [CDR] political team will simulcast events over the weekend in Nassau and Grand Bahama in celebration of Majority Rule.

On Sunday 9th January, a Nassau Breakfast Rally will be held at the Crystal Palace Hotel with Rt. Hon. Perry Gladstone Christie delivering the keynote address. At the same time 7:00 am, on Grand Bahama at the Radisson Our Lucaya Resort, The PLP Deputy Leader, Hon. Philip ‘Brave’ Davis will appear as keynote speaker. 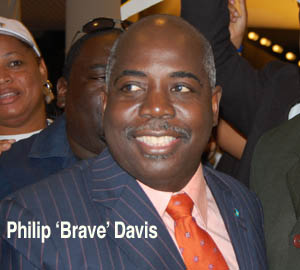 We are told organizers of the Party’s activities have mobilized mass transits at both events, which promises to declare a countdown to Election Day.

“How can the FNM win with a lame duck government and a distracted Chairman who cannot be heard or seen?” a FNM observer said.

With Frankie and Hubert meeting in places, perhaps it is true, Papa is going for real this time and he will help his PLP boys to take the country back.

Boy I tell ya, Politics make some strange bedfellows.