NASSAU, Bahamas — Brent Symonette has not had an easy ride on the political platform lately and from the looks of things, he is fast becoming heavy political baggage for the Free National Movement Government leading up to the next general election.

On Thursday, The PUNCH printed a startling expose of how Brent’s father, Sir Roland ‘Pop’ Symonette, the former leader of the UBP, made more $210 million from smuggling rum into the United States the 1920s and 1930s. This was during Prohibition when rum was an illegal substance in the US, equivalent today to selling cocaine, marijuana, Indian hemp or the smuggling high-powered weapons. Given this fact, the conclusion can easily be reached that the foundation of the financial empire inherited by Brent Symonette was established as a result of blood money, crooked dealings, organized prostitution, and other nefarious criminal activities.

The Prohibition era spawned a proliferation of legendary gangsters such as Chicago’s Al Capone, a notorious rum-runner whose involvement in the Saint Valentine’s Day Massacre, when seven rival gangs in the US were all murdered, was the subject of several Hollywood movies. There is a body of opinion that Pop Symonette was quite comfortable operating in this criminal environment and may have used this experience as the template for laying the foundation for corruption and similar criminal activities throughout the Bahamian society.

Of course, over his many years of involvement in Bahamian politics, including being the first Premier of The Bahamas from 1964 to 1967, Pop Symonette succeeded in sanitizing his past history, but this era has been described as the period that ushered in practices that resulted in the breakdown of core family values in this country. National Security Minister Tommy Turnquest on Monday said as much without attributing any blame to the era of Pop and his criminal rum-running years.

What concerns us now though is the backside rape being committed by Symonette’s son Brent, the current Deputy Prime Minister of this country.

Recently, when asked by a reporter to respond to a suggestion by former Minister of National Security A. Loftus Roker that he should resign from the Cabinet as a result of blatant conflicts of interest related to the awarding of road contracts to his Bahamas Hot Mix company, Symonette threw a temper tantrum.

Bahamas Press has learnt that over the past year Bahamas Hot Mix, which was formed by Pop Symonette to help clean up his rum-running dirty money, received more than $60 million in road contracts from the backs of the poor taxpayers. Brent claimed that money made by Hot Mix is in a trust for his children and not him. But the fact remains that while Brent rakes in mounds of public money for his children on the backs of the poor, some struggling companies cannot find work and are firing workers by the day.

Roker’s genuine concerns triggered speculation as to what role Symonette played when the decisions on granting the road contracts were made by the Cabinet of the Bahamas. From our report, the $60 million in contracts to Hot Mix by the government equates to over $164,383.56 per day in funds from taxpayers to a sitting member of the Ingraham Cabinet.

The conflict allegation also reopens the controversy brought on by Brent when he sat and chaired a meeting by stakeholders of Bay Street. At that meeting back in August 2007, discussions on moving the port were raised. BP below publishes the minutes of that meeting, which were tabled in the Senate by Sen. Jerome Fitzgerald.

In that incident Brent Symonette denied in the Tribune any conflict, but avoided the question of the Port. However, the public is now aware that Bahamas Hot Mix is one of the 19 benefactors as joint owners of the Arawak Cay Port Development Project.

PLP Deputy Leader Philip ‘Brave’ Davis has gone on record in the House of Assembly in asking the government to reveal the names of the beneficial owners in the Arawak Cay Port Development Project, but not a word of reply has come from a single member of the Cabinet.
To date, the government of The Bahamas has given its $28 million to the joint venture, but no record from the public treasury can show that a single dime has been paid by the 19 benefactors to the government as their portion of the joint venture.

Clearly, Brent Symonette must resign, before his FNM government falls!

Bahamas Press is calling for a Royal Commission of Inquiry on the Awarak Cay Port Development Project. We believe people and papers and private emails of Cabinet Ministers should be examined by the Commission to weed out the corruption in the granting of the deal. 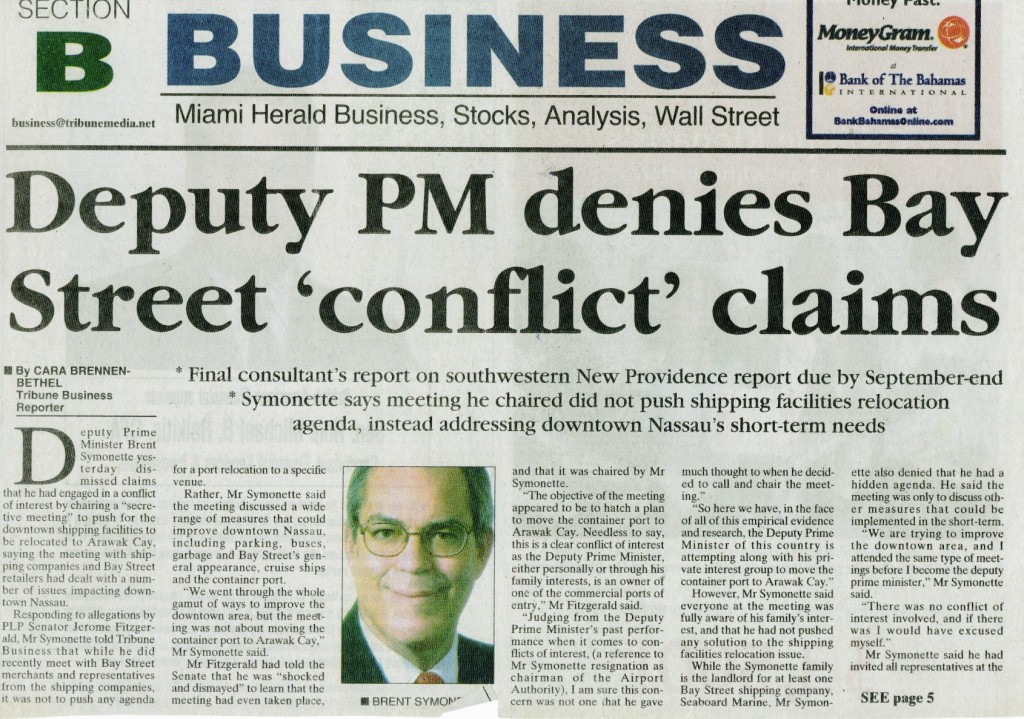 The Minutes of the the meeting chaired by Brent Symonette in his office.

Ref: Meeting with The Honorable Brent Symonette Deputy Prime Minister of The Commonwealth of The Bahamas at the Ministry of Foreign Affairs Goodman’s Bay Corporate Centre July 24, 2007.

Present at the meeting:

The Deputy Prime Minister (DPM) convened this meeting to discuss the Downtown Redevelopment and The Port Relocation.  The meeting commenced at 4:00 pm. There was tremendous representation from the Downtown landowners as well as merchants.

The DPM opened the meeting by welcoming everyone and indicating that he was fairly familiar with what the current problems are and what the previous plans for the Bay Street area were.  He went on to say that he did not wish to belabor those things, but rather to focus on what we can do in the short term to alleviate some of the more obvious problems the Downtown area faces.

Susan Petutch who heads the Nassau Tourism Development Board (NTDB) summarized some of the more prevalent issues that we should be focusing on which included:

The DPM interjected that the Government was a primary offender in terms of misuse in Prime Real-Estate and made reference to the Government Publications Building, the Churchill Building and the Adderley Building.  He indicated that he will be proposing that these building be demolished and replaced by buildings and spaces that would encourage the revitalization of the Downtown area, once he can find suitable premises for displaced Ministries/Departments.

He then went on to discuss how he would like to devise a formula by which to encourage and provide incentives to Downtown Landlords to refurbish their properties to make the Downtown area more attractive.

Susan then spoke about initiatives in motion involving the Public and Private Sectors and suggested that this should continue to better spread the costs of such initiatives.  She suggested that a private company should be contracted to improve the Downtown area block-by-block cleaning and painting.

Larry Roberts interjected that while these ideas are useful he didn’t see where they really addressed the real issue of restoring the area in and around the port, which he felt needs to move for Bay Street to have an opportunity at revitalization.

John Bethel talked about the Inland terminal in the Gladstone Road area, which should go a long way in relieving about 75% of the cargo vehicular traffic in the Downtown area.  He indicated that containers could be moved off hours and taken to the Inland terminal to be received there by the recipients or delivered directly to the recipients’ sites.

Generally everybody felt that it was a good idea, the DPM then said that even if approval was granted to relocate the port to South-West port or anywhere else today it would take five years for it to become a reality.  In light of this he said we need an interim solution that will bring some relief to the declining Downtown environment. The DPM then said that Jimmy Moscow had a suggestion involving temporarily relocating the port to Arawak Cay.  He then invited Jimmy to outline the plan to the group.

Jimmy took the floor and circulated a map of Arawak Cay and a table showing cost for excavation and construction (see attached) to achieve this temporary move.  He talked about dredging into Arawak Cay and creating sufficient dock space to accommodate all our present shipping demands at the Nassau Harbor.

There is no doubt in my mind that this was all pre-discussed and was the crux of the meeting.  The idea got pretty broad acceptance with one or two mild dissenters led by Mike Maura of Tropical Shipping. Mike Maura pointed out that 80% of the truck movement are due to the break bulk shipments which are mostly handled at John Alfred dock and the Betty K., these are the consumer related shipments i.e. Fruits, appliances, automobiles, furniture, etc. He also pointed out that this move can present serious security issues given the rigid standards imposed by the international multi-lateral agencies.

Chris Lightbourne then reiterated the merits of moving and returning the containers during off hours and strongly supported the move of the port to Arawak Cay.

The DPM then asked John Bethel how long he anticipates it will take to construct the Inland terminal, to which John indicated within a year.  The DPM then indicated that in his view the Inland terminal could possibly solve the major part of the congestion problem by moving the break bulk shipment traffic away from town and by relocating The Port temporarily moving to Arawak Cay would alleviate the rest of the Down Town congestion.

The DPM indicated his support for metered parking along Bay Street as well as pedestrianizing Charlotte Street and possibly Woodes Rogers Wharf.  He went on to say that he does not think that the Government has the $2 Million to purchase the Kenny Cartwright lot, to which the response was the Private sector, could buy it and lease it back to the Government.  The DPM also revealed that the Government owes the Cruise Ship Industry some $12 Million, to which many showed obvious surprise.

It was then agreed that Susan would, through her office, produce a White Paper by next week suggesting short-term solutions that could be implemented and long range planning for the revitalization of the Downtown area.

The DPM then closed the meeting by thanking everyone for coming and stating that he would look forward to receiving the white paper by next week.