I am bombarded with photos from the wonders of technology; I shared with you some time ago a story of Grand Bahama as told in three pictures and confirmed my agreement with the adage that “A picture is worth a thousand words” Well, here is another image that shows the logo of the FNM (Free National Mess), with its reflection in the water as the DNA (Do Nuttin’ Alliance), with two captions “Same Party, different packaging”.

Now, if you did not know that the DNA was derived from the FNM or the FNM came from the UBP and the PLP (Progressive Liberal Party), then you might think the party started up by themselves. Given that Branville McCartney has said about what the DNA must do in order to turn The Bahamas around (“Bringing us to the 1st. world etc), we have to question whether this is new or indeed different to what we have heard before. His policies seem to be straight out from the Free National Mess and the former Cabinet Minister looks and sounds as if he is still in the Party. Here is an excerpt from his speech, when he was in Grand Bahama:

“Grand Bahama will be a central focus of the Party leading up to the General Election, as the Party it is a great position to win seats on the Island, as voters angst, against the two major political Parties grows due to the poor state of the economy and high unemployment. Grand Bahama has tried both the FNM and PLP in recent years and none of them have delivered,” McCartney said.

The situation in Grand Bahama has gotten worse with unemployment continuing to climb, while hopelessness and despair are widespread, The DNA has ideas and plans to expand and grow Grand Bahama’s economy and put a dent in the rate of unemployment. Now, let’s look at the second caption: “We need a government that governs for the people, not a new reflection of the elitist past,” all I can say is “Enough said” ! 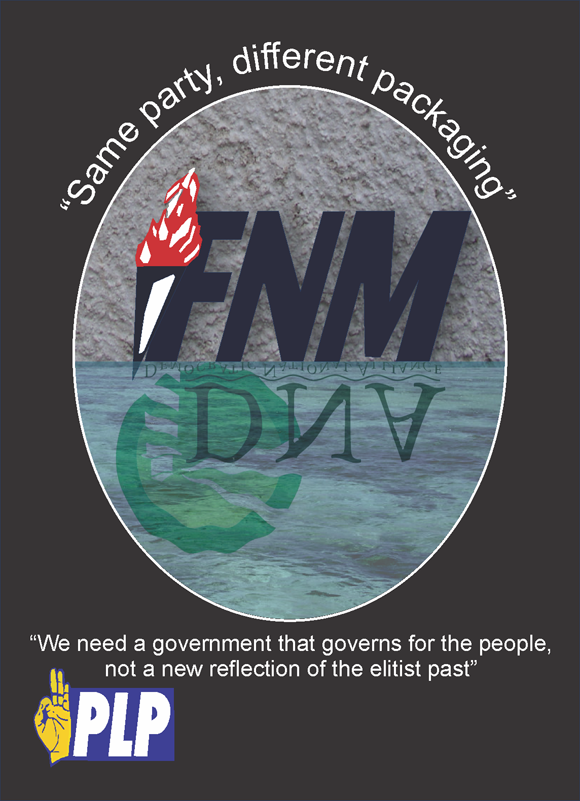