Nassau, Bahamas — A health officer has now confirmed to Bahamas Press that there is at least one case of malaria that is now being treated at the hospital here in the capital.

Malaria is a potentially fatal blood disease caused by a parasite that is transmitted to human and animal hosts by the Anopheles mosquito. Once infected, the disease forms clots in the blood, which if left unchecked could cause blood to clot in the body turning its victim into a fatality.

The man, who BP will not name, is now quarantined and all the necessary protocols are in place. Doctors are monitoring him and at this time there is no cause for alarm. Bahamas Press has learnt he is a relative of a senior Cabinet Minister.

While the government is yet to announce this developing story, health officials are reporting some 2,500 persons have been contracted with the Dengue outbreak that has landed also the wife of the Governor General, Lady Joan Foulkes in hospital. An outbreak in Trinidad has also landed the Prime Minister of that Caribbean island in hospital. 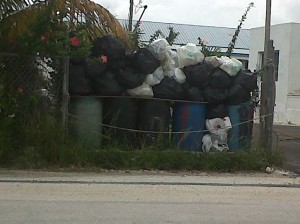 Garbage outside the Muslim building on Carmichael Road. The Garbage has not been collected in the area for 3 weeks. It is no wonder the Dengue is taking over the southwestern New Providence. We can do Better!

And while health officials say no one on Grand Bahama has become infected, BP update in Long Island confirms 5 cases, on Exuma 1 and in North Eleuthera at least 6. The spread of the disease has caused major disruptions in work environments where at ZNS alone we are told some 6 persons are on sick leave because of the dengue.

BP warns all residents to do not wait for the government to clean up and collect garbage in their surrounding areas. For goodness sakes CLEAN UP YA YARD! GET rid of those mosquito infested derelict vehicles. Get rid of the water collecting pots and bins around the yard. Old tires and buckets. And if your garbage is piled up, call IMPACT WASTE DISPOSAL LTD at 361-6722 or at 424-2322 or 361-8112 and let them collect that waste pileup in your yard.

WE CAN DO BETTER!