Gunshots in the Canadian Parliament?

BAHAMAS STATEMENT: The Ministry of Foreign Affairs wishes to advise the public that The Bahamas High Commission Building in Ottawa, Canada and other buildings in the general vicinity including the Canadian Parliament were on lock-down earlier today due to an attack on public buildings by an individual or individuals. The attacks were not directed against the Bahamas or Bahamian diplomats.

The Royal Canadian Mounted Police had ordered all persons in the vicinity to remain indoors during an intensive manhunt for the person or persons responsible for the attacks.

The Minister of Foreign Affairs Hon. Fred Mitchell has been in contact with the Charge, Ms. Roslyn Horton who confirmed that all Consulate employees are unhurt, safe and accounted for. The High Commissioner Calsey Johnson is in the Bahamas for diplomatic week.

The Royal Canadian Mounted Police released the employees at the Bahamas Embassy in Ottawa to go home after the immediate area was pronounced safe, and the office was closed at 4:30pm today.

Full story…[ WILL THE TRIBUNE CARRY THIS ON THE FRONT PAGE?] 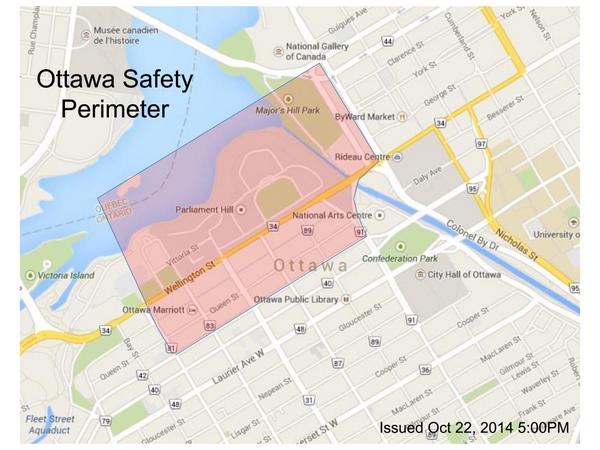 A Canadian soldier was killed this morning in shootings that forced police to lock down Parliament and hustle the country’s prime minister to a safe location.

A gunman killed inside Parliament has been identified as Michael Zehaf-Bibeau, a Canadian national.

Police said earlier that they were searching for two other suspects.

“Today is a sad and tragic day for our city and our country,” Ottawa Mayor Jim Watson said at a press conference this afternoon.

The gunfire prompted security force to take Prime Minister Stephen Harper to a “safe” place not at Parliament Hill, his spokesperson said. Harper’s usual office is in a building near the shooting site.

“The prime minister is safe and not on Parliament Hill and being briefed by security officials,” his spokesman Jason MacDonald said.

Ottawa Police said via Twitter the initial shooting took place at 9:52 a.m. at the National War Memorial of Canada, but that was just the beginning of the violent episode, which has now stretched into investigations in at least one other location: Parliament Hill. A nearby shopping mall, the Rideau Centre, was subsequently evacuated.

Ottawa Police Constable Marc Soucy told Canada’s CTV police were searching for more than one suspect and no one has been arrested, and later said there was believed to be three suspects.

Civic Hospital in Ottawa, the country’s capital, received four patients, including the wounded soldier who died of his wounds.

Earlier today witnesses told CTV they saw a man with long hair carrying a rifle and heard four shots fired at the soldier, who was guarding Canada’s Tomb of the Unknown Soldier. The soldier later died of his wounds.

A witness told Canada’s CBC the gunman then ran the short distance to Canada’s Parliament, jumped a wall, stopped a car at gunpoint and hijacked it, the witness said. The driver got out safely, then the man drove the car to the Centre Block on Parliament Hill where senior government leaders have their offices.

A CBC reporter inside the Canadian Parliament reported chaos there, hearing lots of gunshots. A lawmaker tweeted more than 30 shots were heard inside Parliament’s Center Block.

The gunman was shot dead by the Parliament’s Sergeant-at-Arms Kevin Vickers.

All military bases in Canada have been put on lock down in response to the events in Ottawa, CTV reported. The U.S. Embassy in Ottawa recently followed suit.

Senior FBI and Department of Homeland Security officials told ABC News they are closely monitoring the situation. The White House said President Obama has been briefed.

Canada raised its national terrorism alert level today, following an incident Monday in which a Canadian soldier was killed in a hit-and-run by a man suspected to have been a radicalized jihadist.

“This level means that intelligence has indicated that an individual or group within Canada or abroad has the intent and capability to commit an act of terrorism,” Jean-Christophe de Le Rue, a spokesman for the Public Safety Ministry said, according to AFP.