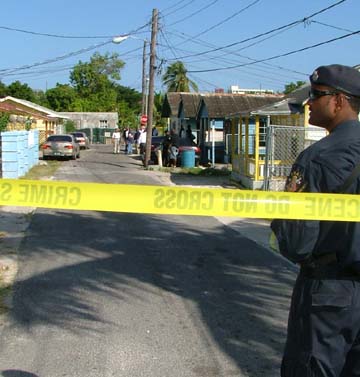 Another murder drive-by shooting in The Bahamas. (file photo)

ELEVEN people, including five children, were shot dead in Guyana last weekend when unidentified gunmen went on the rampage in the village of Lusignan . A couple clung to their 11-year-old grand-daughter as bullets were pumped into them; a little boy clutched his mother’s night-dress as she tried to crawl under her bed. Furious villagers later set up barricades, demanding protection and justice.

Police suspect it was the work of a gang acting on the orders of Rondell “Fineman” Rawlins , Guyana ‘s most wanted man with a $150,000 US bounty on his head. He is said to blame the government for the disappearance eight days earlier of his pregnant girlfriend, on her way to the nearby capital of Georgetown to give birth. But racial hatred provided the target. Like Guyana ‘s government and half the population, Lusignan is mostly ethnic Indian, while Rawlins and his gang are ethnic Africans.

Many of Guyana ‘s neighbours suffer even worse violence. Indeed, the Caribbean , better known for its blue skies, cricket and rum punch, is the world leader in violent crime. According to a joint UN-World Bank study last year, it has a murder rate of 30 per 100,000 inhabitants—four times the North American figure and 15 times the West/Central European average.

Jamaica is the world’s most murderous country, followed by El Salvador , Guatemala and Venezuela .. But some smaller Caribbean islands are catching up fast, irrespective of size or wealth. Pretty little St Kitts, with just 40,000 inhabitants, suffered three murders in four days last November. The prosperous Bahamas is far more dangerous than impoverished Guyana . In Trinidad and Tobago , the murder rate has quadrupled over the past decade, despite a fall in unemployment from 18% in 1994 to 5% last year.

The common factor behind this violence is the illegal drugs trade, which provides gangs with cash and weapons. But the link with narcotics is not simple. Since the 1990s, cocaine shipments in the Caribbean have stabilized while murder rates have soared. Suriname , no slouch in the drugs business, has the region’s safest streets. Violence surges when gang politics are unsettled. Fights break out over turf, bad debts or deals gone sour. Rivalries peak when supplies run dry, and when arrests or deaths create a leadership vacuum.

More than 6 million tourists visited the English-speaking Caribbean last year. Few ran into serious trouble. Most of the bullets hit young working-class men with the wrong networking skills, or their families and neighbours. But armed robbery, ending sometimes in murder, has a wider social reach. In some islands, a climate of fear curtails everyday routines. Many Jamaicans no longer risk a night-time drive to Kingston ‘s airport. Catholic churches in Trinidad have moved their Christmas midnight mass to an earlier hour.

Public reaction varies. Crime barely featured in last year’s elections in the Bahamas and Jamaica , nor is it an issue in Belize ‘s current campaign. But in Trinidad and Guyana , political polarization has brought calls for get-tough policies such as “zero tolerance”, the enforcement of the death penalty, and the imposition of a state of emergency. The region’s prisons are already crowded. Of 31 countries with more than three out of every thousand citizens behind bars, 17 are in the Caribbean ..

Trinidad , Jamaica and Barbados are now strengthening their coastguards to choke the influx of drugs and guns—though this may simply force the drug barons to shift their trade elsewhere. On land, where police services are creaky and their staffs sometimes corrupt, reform is under way, but will be a long haul. Even when arrests are made, it can be years before the culprits are brought to trial. Removing the glamour of gangland crime for the region’s disaffected youth will take even longer.