Nassau, Bahamas — Prime Minister Rt. Hon. Perry Gladstone Christie may just lose one of his most competent New Generation Leaders in the person of Chairman Greg Moss following shocking revelations by the National Insurance Board.

Mr. Christie told reporters today that everyone deserves a course of “Natural Justice” and that he is examining the inquiry to make sure the facts are what they are before there is any action taken against the NIB Director Algernon Cargill.

Over the weekend Bahamas Press released a leaked communication penned by Chairman Moss to Minister for NIB Shane Gibson, which confirmed that the Board had lost all confidence in the Managing Director and had passed a resolution confirming his dismissal at NIB.

Cargill’s position is entrenched in law as a statutory appointment, which means only the Cabinet, through procedures as outlined for dismissal, can take its course before any action against Cargill will occur.

According to Christie, as he told reporters as he went into Cabinet this morning, it is he [Christie] who sets the Cabinet agenda and, as far as he is aware, the agenda does not hold any discussion for the developments unraveling at NIB.

One must believe that the matters unfolding at the nation’s social security safety net have become priority and are something Christie should not “GAMBLE” OR TRIFLE with! The allegation presented in the 22-page document shows how for years many of the electrical jobs granted by the National Insurance Board were awarded to one electrical company – a fact even auditors at NIB overlooked.

How one company could  “HOG-UP” almost every electrical contract issued by the Board is questionable!

On page 13 of the Chairman’s letter, the Board cited the fact that Kenuth’s Electric was paid a cheque in the sum of two thousand six hundred dollars to “Check an A/c”.

It also alleges the same company was paid two thousand and seventy-two dollars to install a plug at NIB ($2072). The Board also discovered that the same electrical company was paid more than Five Thousand Six Hundred and Eighteen dollars [$5618.26] by NIB to install one plug socket for a printer.

One observer reading the news on Bahamas Press commented, “NIB must be now a slush fund for friends, family and lovers. Christie should open a public inquiry on the matter and let the chips fall where they may. He should immediately suspend the Managing Director, otherwise the public will begin to look at the Christie Government cock-eye!”

Christie’s late again hands-off approach to the developments now underway at NIB could result in a dangerous rift in his government, where his competent and detail-oriented Chairman could offer his resignation if Christie fails to act.

Moss in his damning communication to Gibson on Cargill has advised that there will be no meeting of the Board until the matter is resolved and Cargill is shown the door by the Christie Cabinet.

This could be the beginning of the end of Christie as it now appears that the Prime Minister may side with Cargill over his Chairman Moss on the developments unfolding at NIB.

We ga report and yinner could decide! 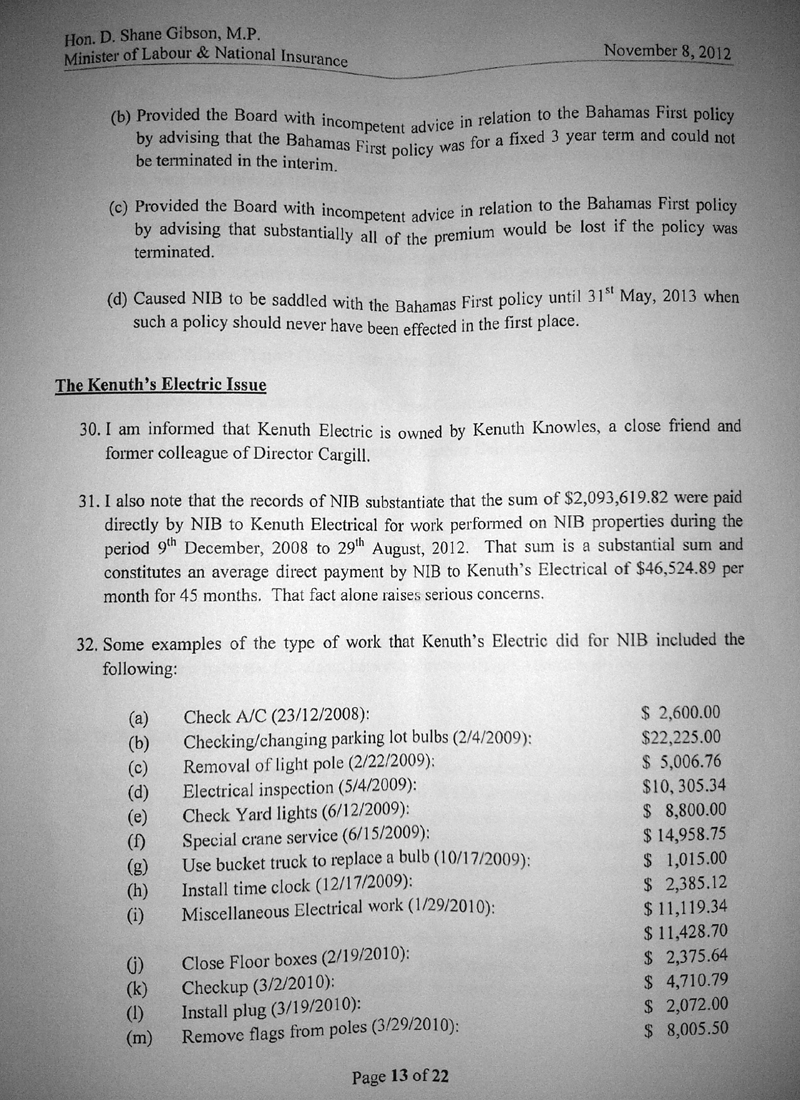