Government has abandoned its ‘Believe in Bahamians’ theme has left only its popular backbenchers fighting for the People! 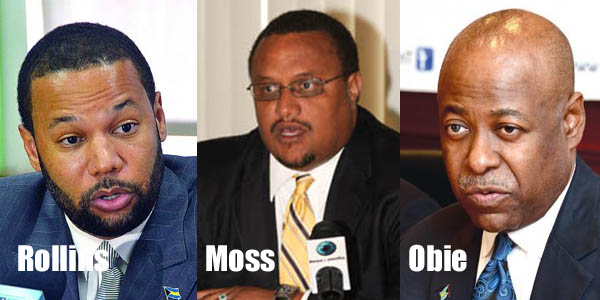 Nassau, Bahamas –– In a very passionate speech, a second PLP backbencher has come out lambasting the Christie Regime on its ‘slow to act’ behaviour towards advancing opportunities for Bahamians.

Bahamas Press told you the chorus is getting louder and louder in the core of the governing party to get it right or get the hell out of the kitchen.

Up to late November a gang of Government MPs – Fort Charlotte MP Dr. Andre Rollins, along with Exuma and Ragged Island MP Anthony Moss, MICAL MP V. Alfred Gray, Bamboo Town MP Renward Wells and Mount Moriah MP Arnold Forbes -have all voiced their opposition to the Gaming Bill. The basis of their opposition is that the bill discriminates against Bahamians while it will allow foreigners to engage in online gaming.

But the most passionate speech to date has come from Marco City MP Hon. Gregory Moss, who not only whipped the Christie Regime for keeping the elements of discrimination against Bahamians on the gaming issue, but Moss added that he will vote against any additional taxation measure to put further strain on the Bahamian people. Moss is against VAT!

You would remember last year October the Christie Government tabled a bill to facilitate online gaming for foreigners, work permit holders and permanent residents living in the country, allowing them to enjoy casinos, while keeping the status quo of prohibiting Bahamians.

Rollins in the Parliament accused the Christie Government of rolling out the “gold carpet” for foreigners while ignoring Bahamian investors. He chided the Government for being “slow to act” when it comes to dealing with the real issue of gaming for Bahamians.

But – no surprise to us – just days following those comments in the House, the ‘Turks Island’ Minister and MP for West End – who is know by BP as the ‘Snitch’ – suggested that Rollins should be a team player. Wilchcombe said Rollins should “get a bit more experience in the game of politics…” That was reported in the Nassau Guardian on Saturday morning.

The West End and Bimini MP added that “the party doesn’t run its internal democracy in the media.”

Interestingly Wilchcombe had the nerve to suggest a conversation about media. He knows well why he is known as ‘Da Snitch’ by BP as he is the biggest informant to both the Punch and the Tribune on PLP and Government matters.

What is indeed surprising, though, is the fact that Wilchcombe was ready and quick to respond to Rollin, but was like a church mouse following comments on the same level of criticism expressed by Marco City MP Greg Moss.

Bahamas Press was the first to report that a growing level of discontent is brewing in the Christie Government and mass disaffection is building within the rank and file of the PLP.

Christie know it and that is the very reason why he this week agreed to meet with young liberals. We wish him luck with that. Our words to the captain is simple; THE SHIP IS SINKING AND BP HAS LEFT THE BRIDGE!

And while this great shift is brewing, the Leader of the Opposition Dr. Hubert Minnis is swelling in popular support across the country and within his Party.

Just Friday in a straw poll conducted on the State of Affairs show with Kevin Harris on Guardian 96.9FM, Dr. Hubert Minnis won the support of the majority of listeners calling in over any competitor.

When the question of who should be leader was put. Minnis won 15 votes, his nearest competitor, Butler–Turner, won 5. Former Prime Minister Ingraham won 4 and so did Duane Sands.

BBB Analytics reported how Dr. Minnis was the most popular FNM in the country by far and that the Opposition Leader was running off with the popular vote nationally according to PLP polls.

In that same poll conducted by Harris, Christie got 1 vote for leader, Fred Mitchell got 2 and Leslie Miller got 5. What in the hell is dis?