“In every other place, you had some others dotted along the line, but in terms of numbers, they became the first independent entrepreneurs out here on Bay Street.”

During the service, 40 straw vendors from New Providence and six from Grand Bahama were recognised for providing over 40 years of dedicated service in the straw market.  Due to budget constraints the honourees were limited to these two islands.

Prime Minister Christie praised the straw vendors for ensuring that their children received an education.

He named several successful Bahamians who had a parent working at the market: Governor of The Central Bank of The Bahamas, Wendy Craigg; former Deputy Prime Minister the Hon. Cynthia Pratt; the new Permanent Representative of The Bahamas to the Organisation of American States (OAS) and former Superintendent of Her Majesty’s Prison, Dr. Elliston Rahming; Businessman Franklyn Wilson and Minister of Social Services the Hon. Melanie Griffin.

The Prime Minister said, “The Governor of the Central Bank’s mother would not have had an opportunity for an education but she had the sense to know that her unfilled aspirations ought to be transferred to her children and her children ought to be motivated to become the best they could.

“That is why I have come here to salute you because that is your story.  The story of the honourees is they themselves would not have had the opportunity for the kind of education they saw their children and grandchildren have, but they understood the value of education.”

He added, “You never allowed your children to believe that you were poor, because you had an independent spirit.”

Prime Minister Christie told the vendors that they set a noble example which should be emulated by young professional Bahamians.  He explained that the straw vendors have been able to overcome the adversities they have experienced, especially when the straw market burned down.

“That is the indomitable spirit of the Bahamian and you have evidenced and demonstrated that and you are symbols of it,” the Prime Minister said.

Deputy Prime Minister and Minister of Works and Urban Development the Hon. Philip Davis; Minister of Tourism the Hon. Obie Wilchcombe; the Minister of Youth, Sports and Culture the Hon. Danny Johnson and other Cabinet Ministers; senior government officials and distinguished guests joined the straw vendors during the appreciation and recognition service. 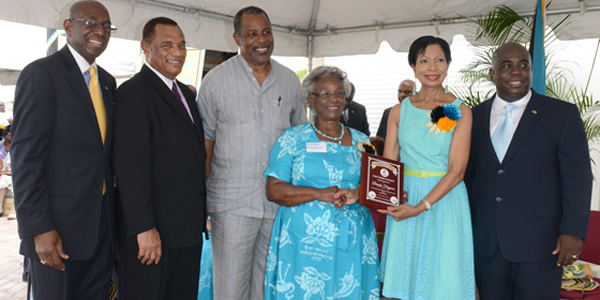