More than 70 recommendations  were presented to Government by the Commission 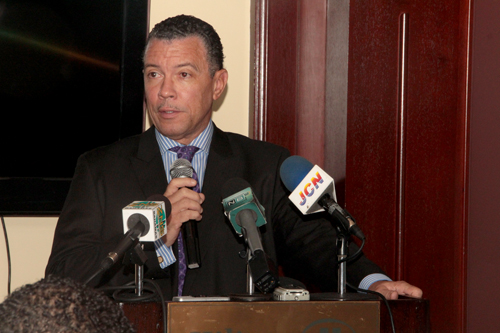 Chairman of the Constitutional Commission Sean McWeeney, QC, giving an update on the work of the Commission.

Citizenship to children of foreign parents will not be granted automatic citizenship – Commission also believes term of Prime Minister should not be limited, but believes certain powers should be reduced by the holder of the office.

NASSAU, The Bahamas — The Constitutional Commission presented its report nine months after it was formed to the Prime Minister and his Cabinet at the Hilton on Monday, July 8, 2013, in time for the 40th Anniversary of Independence.

He gave it a broad mandate to conduct a comprehensive review of the Constitution of The Bahamas, and to recommend changes to the Constitution in advance of the 40th anniversary of Independence.

These changes, once approved by the Government and passed by the Legislature, will require a national referendum to be held so that the will of the Bahamian people can be determined on the matter.

More than 70 recommendations were presented in the Report.

Sean McWeeney, QC, a former Attorney General and leading member of the bar, chaired the Commission, whose members are drawn from the legal fraternity, academia and civil society,  including several Family Island representatives and community leaders.

The other Commissioners are as follows:

Carl Bethel, a former Attorney General and Minister of Education (nominated by the Leader of the Opposition); Loren Klein, a senior lawyer in the Office of the Attorney General and the Commission’s Technical Co-ordinator who acted in a similar capacity to the first (Adderley-Tynes) Constitutional Review Commission; Justice Rubie Nottage, (Retired) who is Associate Professor in law at the College of The Bahamas and a former Chancellor of the Anglican Church in The Bahamas; Mark Wilson, a long serving retired Permanent Secretary and educator; Lester Mortimer, a lawyer and partner at Callenders and Co (who served on the Adderley-Tynes Commission); Tara Cooper-Burnside, a lawyer and partner at Higgs & Johnson (who also served on the Adderley Tynes Commission); Dr. Olivia Saunders, a lecturer at the College of The Bahamas; Michael Albury, a community leader and hotelier from Abaco; Chandra Sands, a businesswoman and entrepreneur from Eleuthera; Michael Stevenson, a law professor at the College of The Bahamas; Carla Brown-Roker, a retired teacher from Grand Bahama; Brandace Duncanson, a Legal Draftsperson in the Law Reform Commission and youngest member of the Commission.

The Commission’s work entailed consulting as widely as possible with Bahamians from throughout the country and abroad, both in interviews and town hall meetings which were held throughout the country. Persons who made presentations to the Commission included framers of the Constitution; current and former Chief Justices; the President of the Court of Appeal; the leaders of the FNM and DNA, and the Attorney-General on behalf of the Government; leaders of major trade unions; representatives from COBUS and the Eugene Dupuch Law School and other youth representatives; the former Parliamentary Commissioner; Chief Clerk of the House of Assembly; a wide cross section of religious leaders, including the Rastafarian religion; leading constitutional lawyers: Mr. Maurice Glinton and Harvey Tynes; environmentalists; representatives of the disabled; representatives of the Haitian community; representatives from international bodies, such as the United Nations High Commissioner for Refugees; the local representative of the LGBT community. In addition the Commission received and considered numerous written submissions from persons representing a wide cross-section of the Bahamian community.