Christie Dem Will NOT Change! And the Bahamas is no different since they came to office… 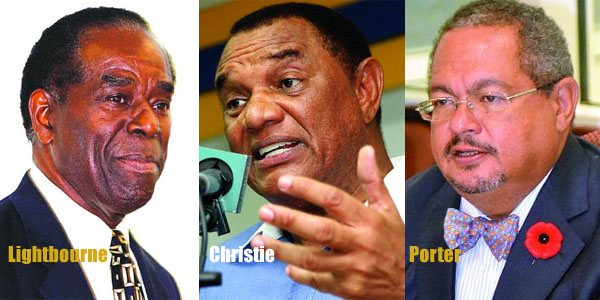 Scandals will chase Christie Regime OUT OF OFFICE!

Nassau, Bahamas — Morgan Heritage wrote the lyrics to a song “Tell me how come” … life is so unfair?

While the poor suffer and the desperation of the weak grows in our midst, members in the Christie Cabinet appear to be drowning themselves in the noise of a bubble.

Tension against the Christie Regime is getting loud by the day! And two years after having snuck into office, the state of the country is no better than the way it was met.

Youth unemployment is still rampant. Banks appear to be in trouble. Foreclosures continue to climb and a pending Vat Tax will once again set the stage to deliver the largest burden of carrying the country to the working poor.

Christie and his band of marionettes don’t get it. Bahamians are catching eternal hell!

Just this week BEC workers almost got stoned to death as they attempted to disconnect the power supply of another family in the shanty ghettos of Pinewood Gardens – Ground ZERO of the crisis where homeowners recently almost drowned in a flood Tsumani; many losing everything in the floods, and where many must decide whether to buy bread or see the doctor!

Boy, life is so unfair!

And as the days chug along, nothing has changed for the working poor since the Christie Regime sailed into office, selling big dreams and sugar dumpling wishes.

And while all this happens, those joined to the HIP of the PLP are selling the idea of legalizing marijuana and ushering in regional integration, while calling members of the clergy “IGNORANT”!

What in the hell is dis? It’s UNBELIEVABLE!!

Nowhere in all their pages of the Regime’s Charter for Governance were such promises penned.

But we are not surprised. This is the way of the Christie Regime two year almost since coming to office; while at the same time rehashing their old ways as being Intimidators and Victimizers of the worse kind! Hubert Ingraham must share some blame in this. He you would remember wrote the Book of Victimization for them when he was elected Chairman of the PLP in 1976. They cannot change!

And while mounds of debt and taxes are being levied on Joe Public, Christie is busy raising the pay for his friends.

The latest incident was with one Ishmael Lightbourne, the appointed Vat Coordinator within the Ministry of Finance who himself is in tatters financially. But Christie cannot see it. He decides to appoint a BLIND CAPTAIN to coordinate the ship on Vat. We ain’t far from port. Soon the warnings of ‘danger ahead’ will go off. But it will be too late.

Imagine taking advice on your already ‘financially strapped nation’ from someone who cannot manage their own money. This is the crisis here which Christie Dem refuse to see. Ishmael Lightbourne needs a financial coach himself; yet he is advising the nation on its future finances? God help us we don’t end up in the hands of the Nigerians. And many on that ship taking on water appear t be delighted ‘Singing Amen’ that Lightbourne is guiding them into the rocks.

But those in the Christie Regime appear to have a deep affection for crisis. Remember that former head of the Stem Cell Task Force, Dr Arthur Porter? You remember how they appointed him as Chairman of the task force, claiming he was eminently qualified.

The African doctor was later discovered to have been wanted by the Canadians and a warrant for his arrest was issued. Porter was also managing director of the Cancer Centre of the Bahamas in Nassau at the time. He has lived in Old Fort Bay and hid himself like a refugee under the protective wings of yinner know who!

While they shopped him around as the best in the business, we all later found out that Dr. Porter – the Sierra Leone-born physician and cancer specialist – faced six fraud-related charges stemming from the construction of the US$1.3 billion McGill University Health Center in Montreal.

You might also remember Dr. Rodney Smith, a current candidate  and former President of the College of the Bahamas, who had to resign his job over issues of plagiarism? He now is the front-runner to head the institution once again as it completes its transformation to university status.

What is endemic here is the fact that these are the people the Christie Regime in particular loves to harbour and push on us as if we don’t know what the concept of having  “STANDARDS AND EXCELLENCE” in the life of nation is. The Christie Regime appears to welcome persons rife with SCANDALS AND CONCERNS! So Lightbourne’s drama is not new. This is the culture deep around the group.

Which brings us to the point – When you think Christie dem ga learn?