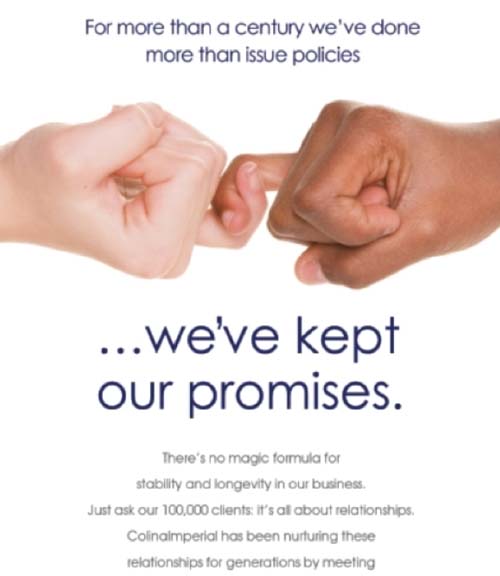 Another interesting ad has surfaced these days. It’s ColinaImperial again, suggesting that they keep promises. Now when we saw this ad we said to ourselves, NOW WAIT! Promises where? This cannot be the same company who undermined its own former president and co-owner Jimmy Campbell. Campbell built the company from the ground but before he can taste the benefits, Manny and his goons undermined the architect of the insurance giant. They kicked Campbell out! And now they talking about keeping promises?

This same ColinaImperial mussy forget it was them who terminated its entire senior management team last year. Where some could not get a payout deal after that termination exercise. Check Davis and Co., who represented terminated workers from that insurance company.

These cannot be same people talking about how they’ve kept promises. They forget how one of their agents called an 80 plus year old senior woman in this country and told her how her policy had lapsed, attempting to rip that woman off a policy she had paid for more than 50 years!

Oh and this cannot be the same company who contacted one of our writers just a few weeks ago and told that individual, who have paid for their insurance for 25 years, that their policy lapsed when every evidence proved it was current?

Our inside agent has told us that the company has RECORD BREAKING policy cancellations, NOT SEEN IN ITS 100 YEAR EXISTENCE! After CLICO this writer would not put another dime in an insurance company. Do the math, $200 a month for 40 years = $96,000 and that’s not interest. PUT YOUR MONEY IN THE BANK AND TO HELL WITH THESE ‘VICKED’ INSURANCE COMPANIES. When they cannot cancel your policy, they close the business down, just remember CLICO, GLOBAL LIFE, British Fidelity, and others have gotten away with it? The clients were all left holding the empty bags!

Look at the hands of the persons on this ad, they’re young cause they know when you get old persons does forget they have insurance. Keep running these deceptive ads Colina, we know you’ll better then the public, “YOU WANT BET?”