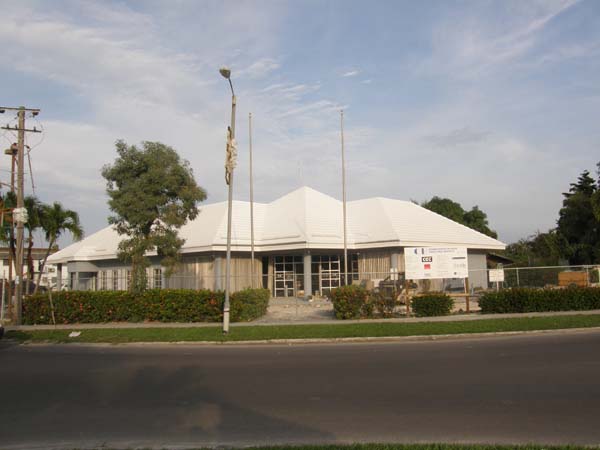 Nine months after fire swept through its busiest branch, Commonwealth Bank said an expanded and thoroughly rebuilt Oakes Field location will open Monday, February 24 after a $2.1 million renovation and rebuild.

“Like the ads say, “‘We’re comin’ home,’” said Commonwealth Bank President Ian Jennings. “And the new home we will open on Monday, will be larger, brighter and offer more parking than before.”

The expansion added 50% more space, increasing the busy branch near The College of The Bahamas from 5,752 to just under 8,000 square feet. The parking lot nearly doubled in size. Bank executives had advised shareholders at the annual general meeting May 15, 2013 that given a still challenging economy, expansion of the Oakes Field branch would be the only capital expenditure for the year. Six nights later during an historic rain and lightning storm, fire swept through the roof of the building but was contained quickly enough, that despite water damage, allowed much of the structure  and critical equipment  to remain. Just seven days later, the bank resumed operations in a temporary location recently vacated by another bank in the Burns House building on JFK Drive.

“We have many people to thank for everything that transpired between the date of the fire, May 21, and the re-opening on February 24,” said Jennings. “The immediate response of the fire department saved valuable computer and operating equipment that allowed us to move into new space so quickly. The company we were able to lease from was extremely cooperative. BTC did a fantastic job  getting our communications set up so quickly. The bank staff who worked so hard to get us moved in  one week.  At the Oakes Field site, CGT Construction, which won the bid for the contract,  met tough deadlines– everyone pulled together and it was a great effort.”

Commonwealth Bank, with some 550-plus staff members and more than 6,000 shareholders, operates eleven branches in New Providence, Grand Bahama and Abaco. It recently reported that unaudited results showed 2013 was the third best year in its 53-year history, a marked turnaround from 2012 downturn in profitability. The bank has $1.4 billion in total assets and its regulatory capital far exceeds that required by Central Bank.