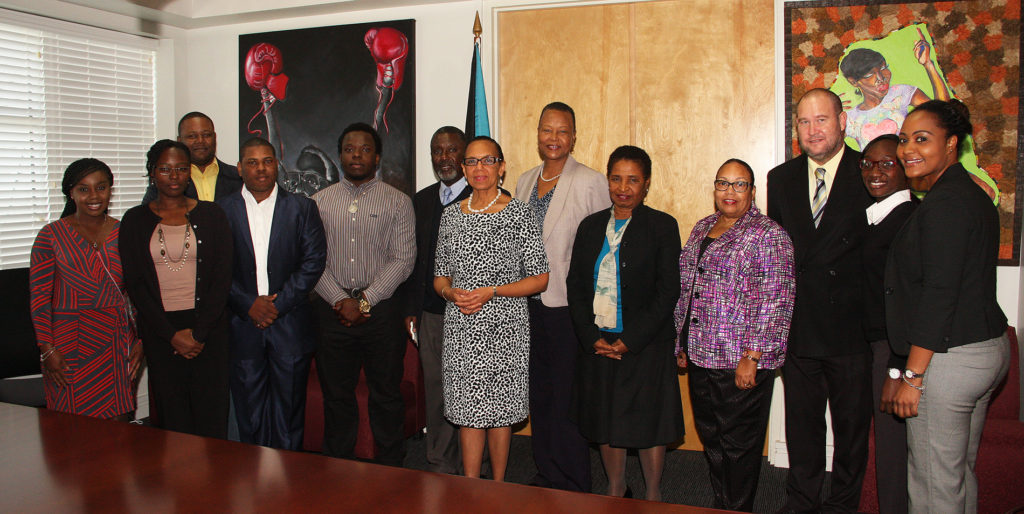 February 1, 2017 – Nassau, The Bahamas – Last week, a delegation led by Attorney-General and Minister of Legal Affairs Hon. Allyson Maynard-Gibson, QC traveled to Jamaica with the purpose of the securing an agreement from the Executive Committee of the Council of Legal Education to recommend to the Council of Legal Education that the University of The Bahamas’ Bachelor of Laws (LL.B.) program should be considered equivalent to the degree program offered by the University of the West Indies.
This morning, in a meeting at her office, the Attorney-General informed LL.B. students from the University of The Bahamas that the success of the delegation’s efforts will mean all graduates of the class of 2017 LL.B. program will be granted automatic admission into The Eugene Dupuch Law School.

At the meeting, Dr. Pandora Johnson, University of The Bahamas Vice President for Academic Affairs, said “Today is a great day, representing a huge step forward. The Attorney-General assured us that she would ensure direct entry for all of you. She made that promise and I am proud to say she has fulfilled that promise.”

Students said they could now let out a sigh of relief as they head toward final exams in April.

“We want to extend our gratitude and appreciation to the Attorney-General and the entire delegation for their efforts. We have been advocating for automatic admission from the inception of this program and we truly appreciate what this will mean for each of us,” said LaShona Knowles, President of the University of The Bahamas Law Society.
The delegation to the Executive Committee meeting included Marco Rolle, Permanent Secretary in the Office of the Attorney-General and Ministry of Legal Affairs; Antoinette Bonamy, Director of Legal Affairs; Justice Ruby Nottage (retired), University of The Bahamas LL.B. lecturer; and Dr. Pandora Johnson, University of The Bahamas Vice President for Academic Affairs.

Big party attended by a senior politician in a gated community out west!

The Pope now supports Same-SEX Marriage! NOW YOU SEE WHY THE CHURCH CLOSE!