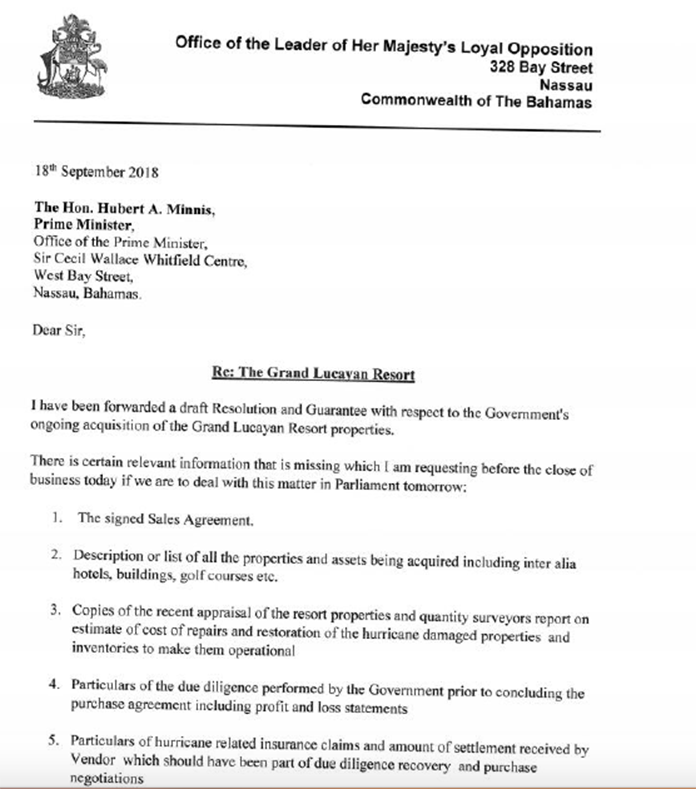 Opposition leader Philip Brave Davis yesterday wrote to Prime Minister Dr. Hubert Minnis requesting more than a dozen supporting documents relating to the government’s purchase of the Grand Lucayan resort, which he said were needed in order for the opposition to debate a resolution in Parliament today to borrow $35 million to complete the purchase.

In the letter addressed to Minnis dated September 18, 2018, Davis said, “I have been forwarded a draft resolution and guarantee with respect to the government’s ongoing acquisition of the Grand Lucayan resort properties.

“There is certain relevant information that is missing which I am requesting before the close of business today if we are to deal with this matter in Parliament tomorrow.”

The information Davis requested ranged from the condition and value of the properties, the potential municipal liens and other liabilities on the hotel and the cost to operate the resort moving forward, among other details.

The Minnis administration is expected to table and debate the resolution and other documents to facilitate the purchase today.

Minnis is expected to deliver a communication to Parliament on the purchase today.

Davis requested the signed sales agreement; a description or list of all property and assets being acquired by the government, including the hotels, buildings and golf course; copies of a recent appraisal of the resort; a quantity surveyor’s report on the estimate to repair and renovate the hurricane-damaged properties, as well as an inventories list that would make the resort operational.

The opposition leader also asked for specifics on the due diligence performed by the government prior to executing the purchase agreement, including profit and loss statements; particulars of the hurricane-related insurance claims and the amount of settlement received by the former owners “which should have been part of due diligence recovery and purchase negotiations”.

Additionally, Davis asked for the projected cost of insurance coverage, staff benefits and severance; operation and maintenance costs over a month’s period, “bearing in mind it would normally take six months for closing on a sale of this magnitude after a buyer has been identified”.

“Are there any other liabilities?” the letter questioned.

In addition to requesting the business plan to support the transaction, Davis further requested that the prime minister provide the source and particulars of funding of operational costs and when the government intends to seek approval from Parliament to expend those funds.

He also called on the prime minster to provide the required prospects being circulated in pursuit of interested purchasers; the particulars of any interested investors with whom negotiations are being conducted; and the plan for airlift and operation of the casino.

He said the opposition should also be supplied with the particulars of the professional advisors and the estimated cost of their services in related to the purchase, and the total amount of stamp duty and closing costs being borne by the government.

As of 5 p.m. yesterday, Davis said he had not received the requested information.

As has been widely reported, the government is purchasing the resort for $65 million, with $30 million paid up front.

The government will repay the loan in seven tranches of $5 million every six months for three and a half years, with an interest rate of four percent per year paid quarterly: $4.9 million, paid in $350,000 installments every three months.

The first tranche of $5 million will be payable after the first six months.

According to documents to facilitate the purchase, the government will also pay HLL over $1 million to cover the operational losses of keeping Lighthouse Pointe open until the sale is completed.

While the government had previously eyed renovating Memories, Lucayan Renewal Holdings Limited Chairman Michael Scott said last week that, based on an engineering report on the three brands, if the government chooses to go forward with renovations, the likely choice would be Breaker’s Cay.

The resort was damaged by Hurricane Matthew in 2016.

Only the 200-room Lighthouse Pointe reopened after the storm. 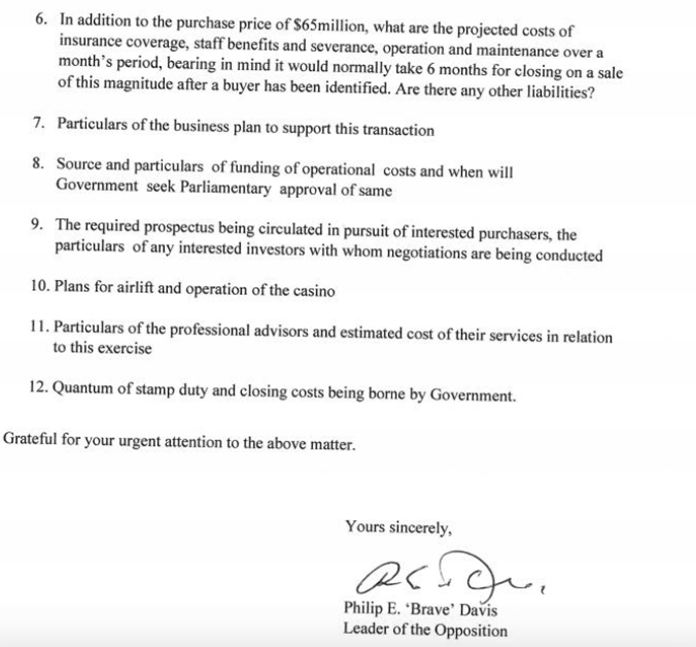