More boots on the Ground! 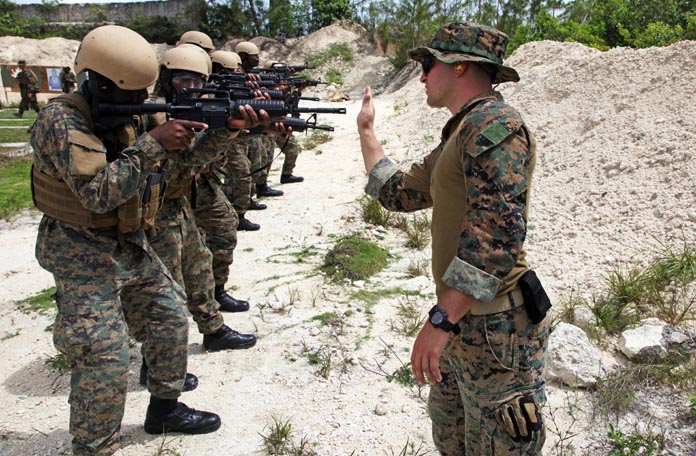 Coral Harbour Base, 10 August 16 (RBDF): Forty-three marines from the Royal Bahamas Defence Force are better equipped to defend and safeguard the country against illicit activities after graduating from the Commando Squadron’s Basic Infantry Training Course.

Conducted by versatile skilled instructors of the Commando Squadron department, the vigorous nine-weeks training program demanded both the mental and physical endurance of course participants. Comprised of marines from the various sections of the Commando Squadron, Harbour Patrol, Port Security and the Military Police/Force Protection units, the 39 males and 4 females successfully conquered the challenges they faced.

Captain Bethel, Commander Defence Force (Acting) stated that this particular training exercise was the first phase of having all members of the Defence Force undergo Basic Infantry Training upon completion of their New Entry Training to ensure that they are better trained and prepared to confront today’s security threats. In the past, the Basic Infantry Course was only offered to those who were drafted to the Commando Squadron Department with the exception of a few volunteers.

During the graduation Ceremony, participants were awarded Certificates of Completion. Marine Seaman Lyndon Rolle of the Commando Squadron Department and Woman Marine Oriscia Clarke of the Military Police & Force Protection Unit were recipients of the Most Outstanding Male and Female Performance Awards. Commando Squadron is headed by Lieutenant Commander Derrick Ferguson and the Chief Instructor for the course Chief Petty Officer Ramone Storr.

In congratulating the graduates, Captain Samuel Evans, Assistant Captain Coral Harbour Base, reminded the candidates that their journey towards being the best they can be has just begun. He also encouraged the graduates to maintain the effort and commitment they displayed during the course when they return to their respective departments.