(Courtesy of Terri Allen) – Collin Allen, 10, of Springfield, got dengue after a trip to the Bahamas. He was hospitalized for three days at Inova Fairfax.

Federal health officials alerted travelers this week about an outbreak of dengue in the Bahamas after a higher-than-usual number of travelers returning from there, including two Northern Virginia children, fell ill with the debilitating disease.

A 14-year-old Lorton boy came down with a high fever last month and such severe muscle aches that he could barely walk, his mother said Friday. Another boy, Collin Allen, 10, of Springfield, had severe headaches, fever, nausea and a rash, became dehydrated and was hospitalized for three days in late August, his mother, Terri Allen, said. Both recovered.

Late Thursday, the U.S. Centers for Disease Control and Prevention posted on its Web site a notice about the outbreak in the Bahamas, a popular destination for Americans. About 1,000 cases of dengue-like symptoms have been reported in the Bahamas since Aug. 9, according to the notice. New Providence, the most populous island, which includes the city of Nassau, has had “heightened dengue activity,” the notice said.

Before this year, CDC officials said, they were not aware of widespread dengue in the Bahamas. Dengue rarely occurs in the continental United States. There is normally not more than one case of dengue a year associated with travel to those islands, said Tyler Sharp, a molecular epidemiologist in the CDC’s dengue branch.

“This year, we’re seeing more [Bahamas travel-related] cases than previous years,” he said. He declined to specify how many because that information is not yet publicly available.

The CDC did not warn against travel to the Bahamas, but advised travelers to reduce their risk of infection by protecting themselves from mosquito bites. They are advised to stay in places that are well-screened or air-conditioned and use repellent when outdoors.

Dengue is caused by a virus transmitted by mosquitoes. It infects 50 million to 100 million people worldwide each year in 100 mostly tropical countries, causing about 22,000 deaths, according to the World Health Organization. There is no vaccine. Patients suffering the intense joint and muscle pain that mark a dengue infection have no treatment options other than painkillers, or in severe cases, hospitalization to replace lost fluids.

Usually dengue is a mild illness, experts said, but it can lead to severe dengue fever, which can be fatal if not treated.

A 12-year-year-old cousin of the Lorton boy, who was on the same vacation, also came down with dengue, the boy’s mother said. The girl lives in Baton Rouge. The mother declined to be identified to protect the children’s privacy.

Doctors need to be alert to the possibility of dengue if patients with fever have recently been in the tropics and have body, eye and abdominal pain, Sharp said. Although it is rare for dengue to be transmitted person to person, it can spread if a mosquito that carries dengue bites a sick person and then someone else, Sharp said. He said he was not aware of any such cases this year.

“This was the first time we’ve had two cases in about 30 years of practicing,” said pediatrician Gary Bergman. Getting them a week apart was even more unusual, he said.

Terri Allen said the symptoms hit her son, Collin, all at once, unlike a typical viral illness. He was sick for four days before spending three days in the hospital, and needed a week to recover. He lost about eight pounds.

“It’s just heartbreaking to watch your child go through that,” she said. “It made me angry that we weren’t even warned. We could have worn bug spray or something.”

In the other case, it was the boy’s mother who alerted doctors to test for dengue. At first she thought he had “a little viral thing.” But his symptoms worsened, as did those of his cousin. The girl’s father went online and found news accounts of a dengue outbreak in the Bahamas.

The doctor was initially skeptical about dengue, she said, but agreed to order the blood test. “I am so grateful they were receptive to my concerns. The doctor called back to say, ‘You all were right, it was dengue fever.’ ” 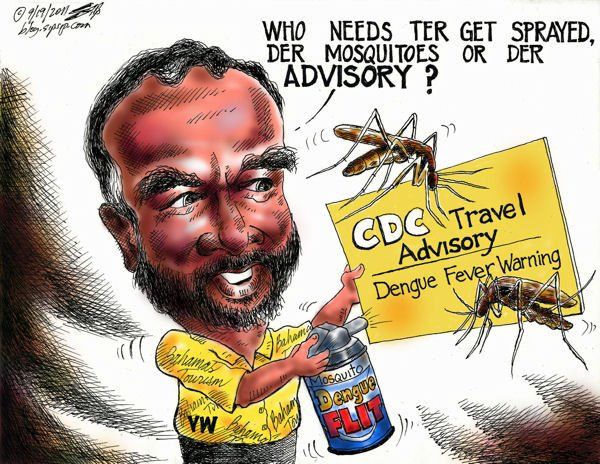