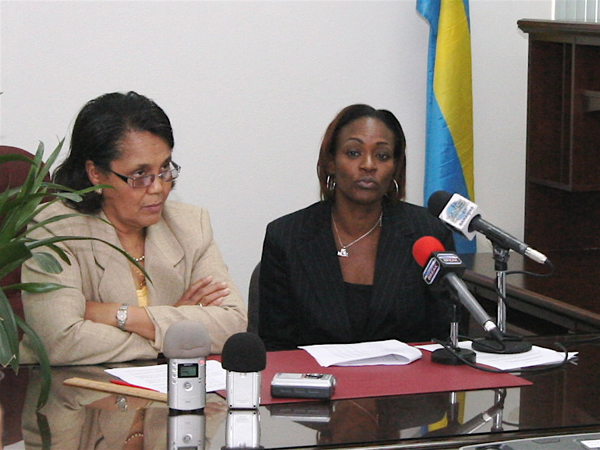 NASSAU, Bahamas – The National Accounts Section of the Department of Statistics released preliminary estimates of the Gross Domestic Product for 2008, and revised estimates from 2004 to 2007.

Director of Statistics Kelsie Dorsette revealed the figures, during a press conference at the Department of Statistics on Friday, May 15.

Last year, the Bahamian economy experienced difficulties as a result of the downturn in the American economy, Ms Dorsette said.

The Bahamas was affected mainly because of its ties to the America, which provided 87 percent of all imports in 2007 and 80 percent of all visitors, she said.

“Businesses were also negatively impacted by the extremely high electricity prices induced by the high cost of oil prices during the latter half of 2008.

“As a result, the Bahamian economy experienced a minimum growth of 0.9 percent in current prices and a negative growth of 1.7 percent in constant prices,” Ms Dorsette explained.

The GDP when measured in constant prices takes into account the effect of inflation and therefore provides a more realistic picture of the state of the economy, she said.

“The country experienced a significant increase in the level of prices during 2008 as the rate of inflation reached a high of 4.5 percent compared to 2.5 percent in 2007.

“This increase was fuelled by the increase in world oil prices which had the domino effect of increasing the cost of production of goods and services,” Ms Dorsette said.

The decline in GDP at constant prices was led by a decrease in household consumption of $110 million.

Households have “a profound effect” on the level of GDP as their consumption represents on average 60 percent of GDP.

Household consumption since 2006 continues to increase but at a slower rate, Ms Dorsette said.

According to the Central Bank’s Quarterly Report, new credit issued to consumers grew by 10 percent in 2006 and by 7.2 percent in 2007 but declined by 1.4 percent last year.

The main industries that recorded a negative growth were mining, hotels, restaurants and marine, she said.

The decline in mining between 2007 and 2008 was mainly a result of reduced salt production.

The hotel and restaurant industries declined, as both are heavily dependent on stopover visitors, which declined in 2008.

The marine industry, which includes businesses involved in shipping and shipping support services, recorded a drop of 12 percent in GVA.

Industries that maintained an increase in their GVA included banking, insurance, real estate and government, Ms Dorsette said.   Banking remained resilient, with a real growth in GVA of three percent in 2007. The real estate industry grew by three percent. The increase in gross rentals was the major contributor to this growth, she explained.