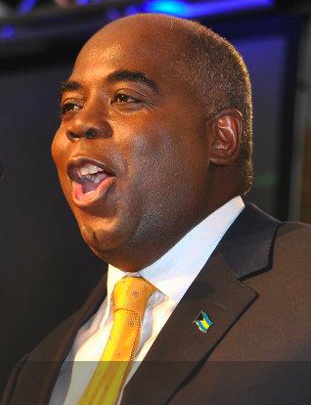 I on behalf of the people of Cat Island, Rum Cay and San Salvador, am pleased to second the motion for passage of the Airport Authority (Amendment) Bill, 2013 as moved by the Honourable Member for Englerston.

We have, just last Thursday, witnessed the official opening of the third phase of the redevelopment of the terminal facilities for the Lynden Pindling International Airport in New Providence.

One and all will confirm that these three terminal buildings represent a magnificent introduction to our capital island for the travelling public.

The Airport Authority has done a wonderful job in its relations with the company employed to both redevelop the terminal facilities and to manage the Lynden Pindling Airport on behalf of the Government. Owing to the obvious success of this project, we have been encouraged to extend the template to others for the operation and management of our airport facilities in our many islands that make up the archipelago of the Commonwealth of The Bahamas.

We have decided to begin with the Marsh Harbour International Airport. This airport had its genesis in the 2004 effort of the Ministry of Transport and Aviation under the leadership of the current Minister, the Member of Englerston.

The Ministry hired a firm to conduct an “Airport Feasibility Study for Marsh Harbour and Greater Abaco Island.” Ultimately a determination was arrived at in 2009 to undertake “a selective tender exercise inviting eight licensed Bahamian Architectural firms to submit a fee proposal to provide full Architectural Services, inclusive of landscaping, structural, mechanical, electrical, civil engineering and quantity surveying for a 24,000 sq. ft. airport terminal building at Marsh Harbour Airport that would provide for both domestic and international passengers; a free standing Control Tower;  and a Crash/Rescue facility. The budget set for the project was $10 million or less”.

The view in the Government at the time was apparently “In discussion of the proposal, it was agreed that having regard to present economic circumstances it was unthinkable that the Government would agree to construct a $30 million terminal in Marsh Habour at this time.”

Nonetheless, a contract was signed with FES Construction out of Freeport for the construction of a 51,000 sq. ft. terminal inclusive of ancillary works in the amount of $27.3million.

In an address to the Abaco Business Outlook Conference in Marsh Harbour just one month ago on 25th September I said:

“I am saddened by the turn of events on this extremely expensive and much anticipated project.

“My Ministry has been challenged to provide all the necessary approvals to the contractor for the construction of the airport buildings as there have been and continue to be concerns of a technical nature which do not permit the Ministry of Works and Urban Development to issue necessary approvals.

“This is a most serious and vexing matter. “I am not an engineer nor do I pretend to be one; but, I accept that there are extremely good reasons for, first, a thorough approval process to be followed by the issuance of approvals following any required adjustments and then the requisite followup through regular objective inspections and confirmation of building according to an approved plan.

“You might fault us for the time we are taking in the research and planning process to bring this all about; but, you certainly can’t fault us for the effort to PLAN instead of just rushing to get things out so that we could claim to be doing more than is sometimes in the People’s interest.

“Sometimes politicians make promises and proceed to browbeat public servant officials to get moving on things and end up with difficulties like we now have with the airport.

“We approached this unfinished project, when we returned to government last year, with a view to completing it in the shortest period of time while trying to ensure that the taxpayer was receiving (the best) value for money and that the project was a complete one which would serve the needs of travellers and those employed within the facility and in its environs.

“All told, even though this description of the challenges with the Marsh Harbour Airport was not pleasant to come to know and certainly is not pleasant to report to you and the Nation, I am pleased to confirm that, under the leadership of my colleague, the Minister of Transport and Aviation, Hon. Glenys Hanna-Martin, the Government is gradually cutting through all the nonsense surrounding this entire project with a view to, at the earliest opportunity, providing use of the airport facilities to our travelling public, Bahamians and visitors, in a safe, secure and efficient condition.”

It is expected that a company will be chosen to operate the Marsh Harbour International Airport in short order permitting the Airport Authority to outsource the management of the airport to a private sector entity.

We also expect that all of the outstanding matters which I outlined in some detail in Abaco just last month will be put in good order shortly to permit this turnover.

We are committed to providing citizens with the best possible services in the most efficacious manner whether it is by direct government delivery or by outsourcing to the private sector.

It should be made abundantly clear that this plan to transfer management to a private sector company does not mean that the Government is divesting the property but only transferring; we are transferring day-to-day responsibility from the Ministry to the successful Government Airport Authority.

We on this side are changing the course of the Bahamas for the better.

Day by day this team lead by Prime Minister The  Rt. Hon. Perry Gladstone Christie is charting a course for the betterment of every Bahamian; his clear, concise and articluate vision, I assure the House, will present our nation once again – not long from now – as the best little nation on the planet.

We on this side will prove to the Bahamian people that we are committed to delivering a country that is safe and strong, with a vibrant and buoyant economy.

It is a New Day Mr. Speaker!

….And we have just begun.

We will turn our country around and move it FORWARD in the right direction.

We have done it before – And we will do it again!

We have begun that great turnaround needed in our nation to: raise standards, create more and better efficiency, and most of all decrease the waste  – that those on that side were so accustomed to.

I read with interest the other day in the one of the dailies where the Leader of the Opposition made the claim that he envisions TRANSPARENCY, ACCOUNTABILITY & HONESTY IN GOVERNMENT –

He adds and I quote [Monday 21st of October Edition of the Tribune]: “I believe in open, honest government, where we hold our leaders accountable.”

The member adds, “ I believe in putting the national interests over the special interests…”

Mr. Speaker I ask him – through you – where was he for 15 of the last 20 years when the conversation of “TRANSPARANCY AND ACCOUNTABLILTY” was absent from the vocabulary of the man gone fishing?

… – The former Member for North Abaco who left this place like a hologram and led his party into three crushing defeats since 2010?

I also ask – through you – of the Member for Killarney was he not a member of that failed Cabinet, which committed overruns on roads to the tune of almost $100 million dollars?

Where was the “TRANSPARANCY AND ACCOUNTABLILTY” in that?

Was not Killarney in the room when a former Cabinet Minister was sitting in that same room – and was awarded a huge piece of work on the roads?

I wonder if the MP for Killarney would agree that the “national interests over the special interests” was not being served when that decision was being made in that room?

Or perhaps the MP for Killarney could inform this House where was his report to “ACCOUNT” to the Bahamian people about what occurred at the multi-million dollar Robert Smith Child /Adolescent Complex and Special Education Unit (RSCAC) at the Sandilands Rehabilitation Centre?

Maybe he would like to stand up and tell the Bahamian People  – why a contract he signed in Feb. 2010 – almost four years now – could not be completed in the required time?

Where was his “ACCOUNTABILITY AND TRANSPARENCY” ON THAT CONTRACT TO THIS PARLIAMENT?

The nerve of the leader opposite!

The people on the front bench of that side Mr. Speaker, are shopping dreams in the dailies and they think Bahamians have forgotten their dastardly, dreadful and shameful record which fetched this country to the fiscal cliffs of record failure.

And they drove us to the edge of that abyss; having little to no record of transparency and accountability to the Bahamian people!

Their Shameful and Shameless record of “Accountability” transformed them into opposition!

I repeat for the record of the House – The nerve of the leader opposite to raise a conversation about “Transparency” with the Bahamian people!

And guess what Mr. Speaker?

He was the Minister of Health who sat in that Cabinet at the time when the deal at Sandilands was inked.

–     Certainly, the member for Killarney could not lecture to that failed Cabinet about his vision then?

Or yet Mr. Speaker,

Maybe the MP for Killarney wants to appraise this House about “Transparency and Accountability” under that former regime when it came to N.I.B?

Perhaps those opposite are prepared to “Account” to the Bahamian people on their shameless record there?!

Let me end just by saying –  We are committed to transforming our country, upgrading our systems, expanding our services with this amendment today.

And we are doing so all in an effort to – as quickly as humanly possible – place our country in a far better state than we met it – just  over one year ago.

We are about delivering that same world-class service not just at LPIA – but in airports all around our archipelago.

In the words of our Prime Minister last Thursday at the opening of LPIA:

“Under the direction of the Airport Authority we have embarked upon an ambitious programme to upgrade and manage our network of airports to adequately keep pace with the level of development taking place in each island.

“LPIA will be the centre-piece and hub with compatible satellite airports in the Family Islands efficiently serving the needs of modern air transportation.”

Mr Speaker – We are now headed in the right direction –