EXUMA, The Bahamas – On Sunday, June 2, 2013, the National Emergency Management Agency, NEMA, conducted an Initial Damage Assessment exercise of the flooded areas and communities on Exuma, caused by widespread rain with thunderstorm in the Southeast Bahamas.

The team travelled via a Royal Bahamas Defence Force aircraft and was received by the Hon Anthony Moss, Member of Parliament for Exuma; Family Island Administrator Theophilus Cox and members of the Local Council, personnel of the Department of Social Services and the Ministry of Works and Urban Development team toured the following areas:

Some of the main challenges were the standing water in various sections of the main road making it impassable for motorists in low vehicles.  Efforts were being made in several locations to dredge trenches from the road to the sea to allow the water to run off.  Water was also pumped out of some areas and the main road.

The communities of The Forest and Redland still remains impacted by the flood and the residents in immediate need of assistance are being advised to make contact with the Department of Social Service office in the George Town.

Further, residents who might have suffered loss or damage to their properties or possessions are also advised to register those losses with the Department of Social Services.

The local farms of Mount Thompson were saturated with floodwaters, and the season’s crop might have been lost.

Coastal erosion along the roadway adjacent to the clinic was also noted, however plans were in motion to rectify the problem.

Additionally, the team toured the area of the local straw market, which was reported to have had extensive flooding, even though the area was dry at the time of the visit.

The team was pleased that there were no reports of mishap or injuries during the weather system and continue to urge all persons in flooded areas to continue to exercise extreme caution as they move about, and to always remain cautious when using electrical appliances near or around standing water.

More rain still in the forecast 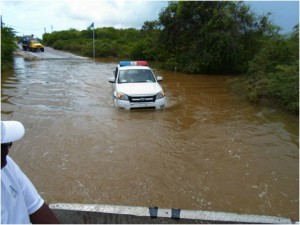 The weather will be cloudy to overcast with scattered showers and thunderstorms through tonight becoming heavy at times, says the Bahamas Department of Meteorology in its public forecast for today and tonight, Monday, June 3, 2013.

Small craft should be alert for gusty winds and high seas in thunderstorms. Winds, east to southeast at 10 to 15 knots. Seas 2 to 4 feet.

In its extended weather forecast, the Met Department is advising that the slow moving trough will continue to produce tropical moisture over the islands.

And for Wednesday, the weather partly cloudy with scattered showers and thunderstorms with winds southeasterly at 10 to 15 knots. The seas 2 to 4 feet.

A broad area of low pressure near the Yucatan Peninsula shows a low chance of becoming a tropical cyclone during the next 48 hours. Elsewhere, tropical cyclone formation not expected through Tuesday.